Thor is in cinemas. Summer has begun! 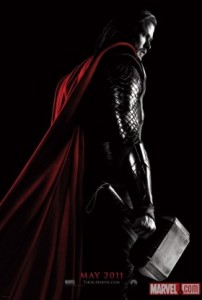 To sum Thor up in a line: it’s more like Iron Man, than Iron Man 2. You’ll probably hear this said about the movie a lot. It’s a good thing though. Its high praise, cause Iron Man is a great movie.

What I mean by it, though, is that Thor is very much its own stand alone movie. There is the presence of SHIELD, but it’s a lot like Iron Man, were they’re more a government agency like the FBI or CIA, and not just advertising for The Avengers.Â Agent Coulson helps the film feel like its set in a universe where you might find Tony Stark, but the story is very much Thor’s.

Thor is very much an origin movie, but it’s a different kind of origin movie to what we’ve seen before. Instead of the hero gaining his power through some scientific, freak accident, or training for decades for a war on crime, Thor becomes a hero in his own way.

At the start of his story, he already has his great power. But he’s foolish and arrogant. These are not qualities of a hero. Thor then finds himself banished on earth, powerless. The rest of the film is then Thor trying to regain his power, but to do that, he has to prove himself worthy of it. This is very much straight from the comics. And it also has a slight Shakespearian quality to it (thank you very much Kenneth Branagh!)

I really liked this about the movie. It’s always about Thor’s journey to becoming the hero he can be. It’s also pretty convenient how it set’s him up perfectly for The Avengers, but if I mention that, most of what I just said is total rubbish. Mores’ the pity.

Thor also sports a very entertaining supporting cast, on and off Asgard. The star has to be Tom Hiddleston as Loki. The trailers worried me a bit, because they didn’t seem to show, that much, that he’s the villain of the movie. Though, in hindsight, that seems like a good thing now. I’ve recently become a fan of the Loki character in the comics, and I was not disappointed with the portrayal of the character in the movie. Hiddleston does a great job at playing the mischievous, always plotting character. It was as if he’d walked straight out of the comic, and onto the screen.

Another highlight, for me, was Joshua Dallas as Fandral the Dashing, easily my favourite one of The Warriors Three. Even though he didn’t have much screen time, the time he did have he was very ‘dashing’ and seemed like a perfect fit for the character. The Warriors Three, as a whole, were fine. They do what they’re supposed to do. But Fandral did that little bit more. 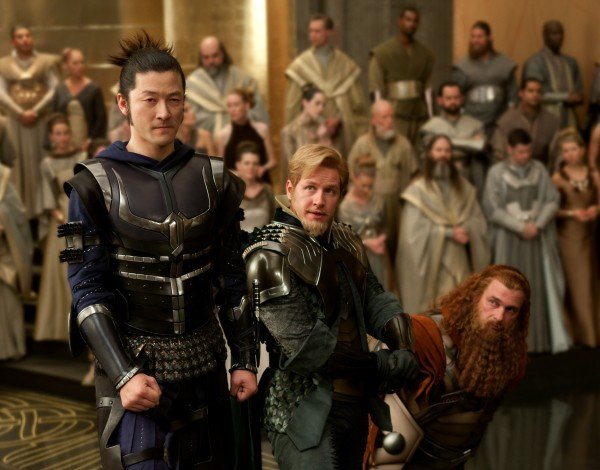 Throughout the film, we cut from scenes on earth, to scenes on Asgard, and even scenes on Jotunheim. The establishing shots of Asgard were breathtaking. It really looked like a magical place. However, Jotunhiem was the realm I lovedÂ  the most. They’ve done a fantastic job at making it look like a dying frost world. Its also the realm where the best action set piece takes place.

The film very much felt like its own self contained story, and at the same time ,felt like it was part of the Marvel Cinematic Universe. After Iron Man 2, I think this is worth mentioning. It’s a positive comment about the film.

After it finished, and the titles were rolling, I still wanted more. I don’t mean the post-credit scene (which confused me a bit, so I’m not going into it) I mean wanting to see more of Thor. We finally see him become this hero. Great things could happen. And then it ends. It’s a good job they’re making a sequel!

And also, the one thing the comic book nerd in me wanted to see the most, was Thor use mjolnir for flight. I won’t spoil anything, all’s I’ll say is… I wasn’t disappointed.

Recommendation: Watch it! In 2D!