Then I found out that the show would be CG. Now, I don’t hate CG shows but generally prefer hand-animated stuff. They tend to be better and more fluid overall in my experience. I have been proven wrong before like with the stellar Green Lantern: The Animated Series, but still that was the exception not the rule.

I went into the premiere of the new Ninja Turtles with tempered expectations, but am happy to say I was pleasantly surprised. Overall, I enjoyed the show with a few minor problems, which I shall hit on first.

My biggest gripe with the show was the characterization ofÂ Michelangelo. The Ninja Turtles for the most part all have one-note personalities. Leo is stern and dedicated leader. Ralph is the hot-headed brawler, and Donnie is the scientific mind of the group. Mikey has always been dubbed the “party dude.” For the most part, it always meant that he was the jokester/less serious member of the group. He was a great Ninja with a child-ish mentality.

This show does away with it (at least in the premiere) instead making him more of the group’s idiot. He has a short attention span, can’t keep the details of a plan together and comes off a bit more whiny than expected. Perhaps, it will get better as the show goes on, but for now not liking what they are doing with him.

Aside from that, I didn’t much care for the Krangs to a degree. I don’t mind the idea of aliens in the Turtles-verse, they have and will always exist. But as far as I know Krang was a specific member of an alien race, and not an actual alien race. It doesn’t help that they really lacked any type of emotion or reason to make them a compelling villain. Again, I imagine as the series goes on they will grow and evolve. 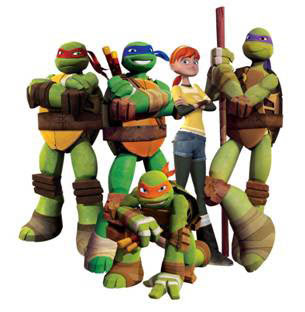 Those were my main two problems with the show. Other than that, I really enjoyed the show a great deal. The CG works well with the show. It moves smoothly. And it has an interesting mix of CG, hand-drawn animation and even comic book stills. I like how they mixed the styles to highlight key parts of the story. Like the origin being done in a different style, and the final shot of The Shredder being a comic cover.

The show also works on the visual style of the Turtles. Not justÂ satisfiedÂ with them wearing different colorÂ bandannas, the Turtles are different sizes, shapes and even different colors. Sure, it’s just variations of green, but different. Also they wear slightly different tone of gear as well.

The voices for the most part work. I’ve been through 2 animated series, 4 live action movies and a gawd awful live-action television series so I’m accustomed to the Turtles not really having a standard for their voice work.

I was especially fond of Splinter’sÂ portrayalÂ in this series. Splinter, for the most part, has always been showcased well but some nice visual changes like making him taller than the Turtles and less frail make for an interesting change. It shall be fun to watch when he finally joins his boys in battle.

There are other things to touch on like April and Shredder, but I feel like I need more time and episodes to properly see where the show is going with them before I comment. I will say I don’t mind the fact that April is a teenager, but do think Donnie’s crush on her may get old fast. Again, we shall see where they go with it.

It’s only one episode (or 2 30-minute episodes), but Ninja Turtles 2012 has really started off strong. I’m happy to see that my initial fears were unwarranted so far!