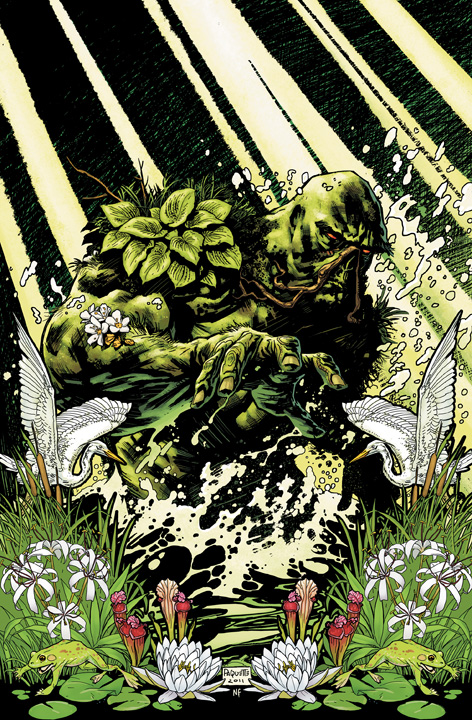 So I was coming into this issue pretty fresh. A new reader of Swamp Thing. What attracted me to the book was the creative team. I’d checked out some of Scott Snyder’s run on ‘Detective Comics’ and enjoyed it, and wanted to check out some more of his work. I was also looking for something slightly different from a monthly ‘superhero’ comic. What better place to start off then a brand new number one, right?

I have to say, I wasn’t disappointed.

The issue starts with birds dropping dead in Metropolis. We’re then given a very tight and well drawn two page spread of a similar phenomenon happening in Gotham City and off the coast of Coast City. This is a good way of showing us that this new Swamp Thing title is directly involved with the new DC Universe, and it also sets up what will most likely be the first story arc.

We then witness a Mastodon skeleton being stolen from and excavation site. This is followed up later in the issue with the scientists behind the excavation wondering who or what could have stolen the skeleton and then being possessed by bugs. This is the part of the issue that really shines. It shows the horror side to the Swamp Thing title, and Yanick Paquette’s art makes the scene gruelling without being too gory. After all, this isn’t a mature reader’s title.

What’s also interesting about this issue is that, even though it’s a number 1, (possible spoiler ahead) the Swamp Thing character doesn’t actually appear until the final page. His presence is felt throughout the issue, through Snyder’s voice-over narration to the many references to nature. But the main protagonist of the issue is Dr Alec Holland, who, at first, I thought was Swamp Thing’s alter-ego, but after the last page I’m not sure. That’s not a criticism, I look forward to it being explained to me in future issues.

Scott Snyder has made this book very accessible to new readers. It still seems that his return during Brightest Day ‘counts’, part of his conversation with Superman is about him returning. But it’s covered in a way that you don’t have to have read ‘Brightest Day’ or ‘The Return of Swamp Thing’ mini that followed it. While Paquette’s art doesn’t really shine during the talking head scenes, he handles the horror and creepy scenes very well, making him a good choice of artist for the book.

Live or Die Scale: Live. I think Swamp Thing has a large enough fan base there to survive longer than some of the other titles. Scott Snyder is also becoming quite a popular writer, which will help the book sell. If Snyder can keep up with the good stories, and Paquette can keep on schedule with the art, the book will be fine.

Recommendation: Buy it. As I said earlier, I was pretty much completely new to the character, and I enjoyed the issue, so I think that’s a good sign for the book, and pretty high praise.