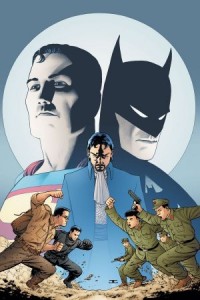 I have to be honest, I’ve been enjoying this title more since Chris Roberson came on to finish the ‘GROUNDED’ story arc. I didn’t hate it all that much when JMS was writing, but it just didn’t seem to stand out that much. It’s still not one of my favourite titles I currently buy monthly, but I usually enjoy the book enough month-to-month, to keep buying and reading the title.

In issue 710, we finally get to see Bruce Wayne confront Superman about his current ‘walk across America’ adventures. We’ve seen A Batman previously in the ‘GROUNDED’ story arc, but that was Dick Grayson. This time round, it’s Bruce Wayne’s Batman. The two heroes recall one of their first encounters together. Now, I could worry and spend time thinking about how this fits in with actual continuity, but I’m not going to bother. I’m just going to assume that it doesn’t stray too far from the continuity of earlier adventures between Clark and Bruce. Honestly, if I hadn’t enjoyed the issue I’d probably be nitpicking over continuity problems, but this is an enjoyable issue, so I don’t care. Basically, telling a good story is more important then continuity.

One problem I did have with this issue though was the way in which the early encounter between the two heroes is told. Most of it is done through caption boxes, which is fine, but I’m not sure if they were written as a conversation between Clark and Bruce, or if each character is talking more to the reader. It doesn’t really read like a conversation between two friends, it’s almost as if they’re reading a script.

Other than that, the early encounter is fun. I really like how the issue has two different art teams. One works on the past sequences, one on the present. It helps show difference in time better. And the villain of the past sequences is a well known, immortal DC villain which should be cool for readers. I, for one, liked the choice of villain. And they refer to each other as ‘Smallville’ and ‘Gotham’, which is amusing.

In the present day, Superman and Batman talk briefly about their current statuses in the DC Universe. But it’s mainly Batman telling Superman that he needs to move on from his ‘walk’. I finished the issue feeling that Batman had made an impact on Superman, and made him think further about some of his recent choices, and what he’s currently doing.

Plus, Batman and Superman in a comic together is always awesome. Always.

New Reader Accessibility Rating: 6. It is part eight of the ‘GROUNDED’ arc, but each part is quite episodic. I think you could pick this issue up and feel satisfied after reading it, and not feel like you have to come back next month for part nine. However, at the same time, I think Chris Roberson is building towards something. We’ve been getting hints towards something larger since he came on the book. Like something is actually wrong with Superman. And with story arcs like that, they’re always enjoyed the best when you read every part. Everything matters.