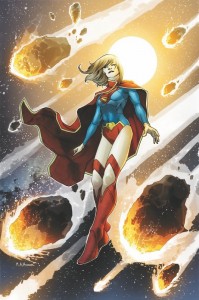 Supergirl’s rocket crashes in Kansas, shoots all the way through the Earth, and pops out in Siberia.Â  Men in mechanized suits try to apprehend the confused Supergirl (she doesn’t remember how she arrived in this predicament and for a long while believes that she’s dreaming) as her powers being to manifest with the rising sun.

The entire issue is Supergirl fighting these men as she internal monologues trying to make sense of what’s happening to her.Â  The art is very solid and probably one of the better of the redesigned costumes in my opinion.Â  I must make mention of the use of sound effects.Â  Hill does a great job of picking fonts that match the art while feeling very unobtrusive.Â  Rather it really adds to the overall look of the book.

A decent first issue.Â  I would almost say it was over too fast, but really, this was probably the best way to handle her introduction and end it where it does when a certain somebody shows up.

Survival Rating: LIVE. I see no reason why this book wouldn’t survive based on this first issue.Â  I think issue 2 will reveal more about what sort of book this will be though.
Recommendation: Borrow It.Â  Visually it’s one big fight scene and isn’t anything you haven’t seen before.