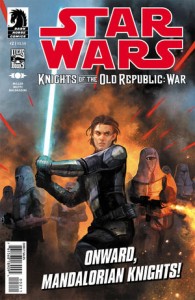 The second installment in the War limited for Knights of the Old Republic is out and has reunited us with Zayne Carrick and his topsy-turvy misadventures. As the first issue concluded, we pick up with Zayne stuck in the middle of the Mandalorian Wars. The issue sports the same creative team as the first, with John Jackson Miller on the script, Andrea Mutti on pencils, Pierluigi Baldassini on inks, and Michael Atiyeh on colors.

Actually, I guess that’s a pretty good place to start, as I was underwhelmed with the art from the first issue. In general, this is better, but isn’t a huge step forward. The first issue saw problems in just incredibly repetitive landscapes and scenes. Almost the entire issue was outside during the same general time, so the rugged landscape of war was simply repeated. This issue actually features an indoor scene as well as a transition to night, so while there are definitely chunks of repetitive colors, at least there are multiple chunks. The pencils and inks are just as busy as before, and not a style I’m particularly fond of, but the at least felt more unique thanks to allowing the color palate to change somewhat.

In terms of the story, I’ll be the first to say that I really enjoyed KotOR and have high hopes for this new limited, but the execution of that idea left a lot to be desired at the end of this issue. As the first issue showed, there are a number of Jedi who have joined the Mandalorians. The big question here is why would Jedi join the Mandalorians and actively wage war? I’m afraid I don’t have much of an answer for that. There is an attempted explanation in the issue that includes balancing the scales so both the Republic and the Mandalorians have Jedi fighting with them. I’m not sure I quite follow, as the Jedi fighting with the Republic are doing so because they believe the Republic can still be a good force in the galaxy and are trying to bring peace to it, while these Jedi fight on the opposite side because… it needs to be a fair fight? 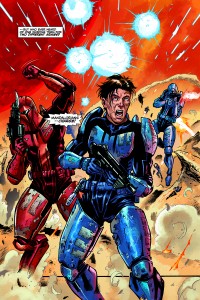 On the other hand, we are given a nice moment where we get to glimpse into the family life of a Mandalorian and see how they are, you know, when they’re not invading people and forcing conscription or slavery. I’ll say this; it’s a solid choice and a good break from the constant battles that dominated the first two issues.

That said, I have one more gripe in that (in order to be spoiler-free), this issue ends with Zayne finding out the next target of the Mandalorians and it just so happens to be somewhere he is familiar with and may be of specific use, now that he has been forced into fighting with the Mandalorians. Ask me why they wanted to have someone fight for them that doesn’t kill and rarely shoots at or attacks anything, and I have no answer for you. Regardless, my issue is mostly with how convenient it is that the timing works out and he happens to be there just perfectly for this serendipitous next target. In case you haven’t gleaned, I’m not a fan of coincidence in fiction. It’s generally unbelievable and used poorly, so I’m not currently particularly happy with this issue.

I do have to admit, however, that both of my main gripes with the story in this issue may not be valid. Unfortunately, I can’t say for sure because the only thing that will make them valid or not is whether what this issue suggests is actually true or not. Maybe it’s a coincidence they picked up Zayne at this moment. Maybe it’s not and it was actually planned, which would make much more sense. Maybe there is a more complex reason why Jedi have joined the Mandalorian cause. And perhaps there’s not. In terms of the arc, it’s is very much a transitory issue, moving from situation one to situation two, so it’s pretty hard to take anything as concrete fact this early. Overall, if you read the first issue and enjoyed it, you’ll need to pick up this one to keep up with what’s going on. If you’ve read none of the arc, I may suggest a little patience until it fleshes out some more and we can legitimately determine the strength of the story before you go rushing out to purchase it.

Recommendation: Wait on it