Star Wars is a vast universe and, as such, allows for many threads to be told in the same saga. Knight Errant is a thread that focuses on a young Jedi Knight in particular, Kerra Holt. This review will be focusing on the last 5 books of the Knight Errant series, which collect the Deluge story arc in completion. Scripted by John Jackson Miller, the story is set in The Old Republic era, specifically 1,032 years BBY. The team shifts some, including Ivan Rodriguez and David Daza on art, but is generally rounded out with Iban Coello on pencils, Sergio Abad on inks, and Michael Atiyeh on colors. Despite the different art teams, Michael Atiyeh stays on colors throughout, which gives a pretty uniform sense of art through the arc. Most of the pencils and inks are very similar, clean, and direct. It basically comes out like pen on watercolors, which is very clear and gives a nice depth of contract between the exact lines and the thick-stroked color shading. 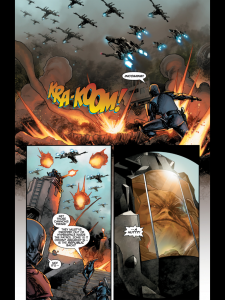 Deluge begins with Kerra Holt returning to Aquilaris, her home. The planet is contested in the middle of a number of battling Sith lords, all vying for dominance in the galaxy, but Kerra Holt returns home just in time to catch a new player trying to force his way into the game, a Hutt named Zodoh. This Hutt is a peculiar one, choosing to be far more hands-on than the rest of his kind tend to be, and even points out that he is looked down upon for it. Regardless, I’ll admit it’s a pretty amusing thing to see a Hutt in battle armor and flying an attack ship. There is even one point in the arc that has the Hutt fighting in zero gravity, which I can also say I didn’t see coming, but it’s definitely entertaining.

Things then get a little more complicated when Kerra runs into Captain Jenn Devaad and her Devil Squadron. Devaad has a past with Zodoh and that’s made pretty clear, but she has shown up as part of a relief effort to help out the planets in turmoil during this tumultuous time. The people on Aquilaris are definitely caught in the middle of everything, and, to make matters worse, appear to all have been addicted to a drug that makes them completely indifferent to anything and everything. Save for a very small number of them, they don’t even have an interest or a desire to be saved, even to live.

For the sake of not ruining the arc for anyone, let’s look at a more general idea of the arc, its flow, and its characters. The main character, Kerra Holt, is likeable enough. She’s not really unique, however. She is the typical young, spirited, altruistic hero, although she is definitely spunky in her own right. Zodoh is the standard, morally bankrupt, self-promoting evil guy, off to make a fortune and gain power at the expense of others. Devaad is the tarnished hero; the one who makes sacrifices for the greater good, with a cold and calculating sense of battling the enemy.

The very straight-forward and standard character type is reflected in the arc. It’s entertaining for Star Wars fans, but it’s not what I would call nuanced or very intricately put together. There’s a bad guy, there’s a good guy (girl), and there’s a middle party that you are trying to learn the motivations of. Really, that’s it. That is just as complicated as it is, so be aware of that. If you are hoping for a gritty and morally grey struggle that defines characters in a new and revolutionary way, I’m afraid you will be looking in the wrong place. Entertaining is, I think, the most accurate word we can use for it.

The writing is done well enough. The characters, since they are all starkly different, are believable in their own clichÃ© roles, although very dramatic. Let me further explain. As an aspiring writer myself, one thing that gets pounded into your head from the moment you walk into your first undergraduate class is that having a character that has every part of their dialogue end with an exclamation point gets tired very quickly. I’m not saying that’s absolutely true, but I’m saying it’s something that I do agree with and this arc is a great example of that. There are entire pages of dialogue where every sentence ends with an exclamation point. Kerra, Zodoh, even the drugged people of Aquilaris are prone to shouting at everyone about … well, everything. Having everyone do this gives the arc a more basic feel than a lot of other Star Wars comics I’ve read. It seems the target audience is a younger group than something like Legacy where you find a lot more difficult decisions and less black and white, good and bad.Â 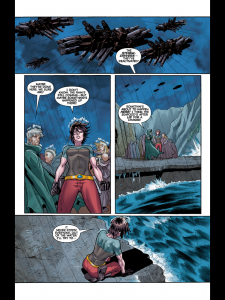 Overall, it was an interesting enough read, although the constant shouting did become tiring. The art was agreeable and something I did find myself stopping to just appreciate on more than one occasion. However, playing more like a cartoon you’d find on TV than an intricate novel, you’ll want to consider that before you decide to pick it up or not. If you’re just looking for a lighter, simpler arc with clearly definable roles, I’d definitely suggest it. It’s easily accessible and stands alone from the prior Knight Errant books, so the only knowledge you’ll need is a very basic understanding of the Star Wars universe.