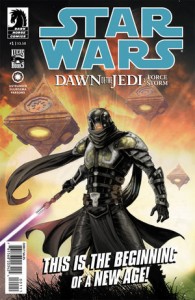 Dark Horse is coming out with a new series looking at the origin of the Jedi, aptly titled Dawn of the Jedi. The creative team is pretty fearsome, featuring a story by John Ostrander and Jan Duursema, and an art team including Duursema with Dan Parsons and Wes Dzioba. Both Duursema and Ostrander are titans in the field, probably best known for their work on the Star Wars: Legacy series, at least as far as the Star Wars universe goes. It’s definitely a pretty daunting task to undertake the origins of the Jedi, so it’s nice to see a pretty proven group assembled to tackle that obstacle.

Being the inaugural issue, there are definitely some plusses and minuses worth taking a look at. The story itself seems pretty insistent on getting straight to the meat of the situation. Much like A New Hope, we are entering into a story that has already started and has a pretty rich past. However, A New Hope had a wall of text that scrolled by in about 30 seconds, where the first issue of Dawn of the Jedi goes on an expositional fiesta for very nearly half the issue. It’s not bad, it’s not disconcerting, it is definitely necessary, but it’s also pretty long. Oddly, to get to the meat of the story, you have to include a bunch of extra exposition at the beginning so that you don’t completely lose your audience. It’s not an ideal situation, but it was also executed well enough that I’m not upset, just anxious to get to meet our characters.

The good part of having such a lengthy exposition is that it allows the art team to flex their muscles a bit, since they are given such a wide and distinct array of locations and people to draw. The art is always in motion and feels very dynamic, which I like. The inks seem a bit heavy at times, but the art was definitely a highlight that helped me push through page after page of exposition. 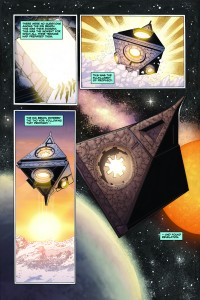 We only get one page of (what I assume will be one/some) of the protagonists, who express a very interesting, although brief, reflection on what it is to be a Jedi. It’s almost Taoist in its examination, at least by the character that is clearly the master. We spend far more time with our antagonists, who definitely feel very Sith-oriented, but in a more directly and purely evil way than you’d recall the Emperor being, for example. I’m not particularly surprised by this, as Ostrander had a similar task in Legacy, as he created not only a whole new group of Sith, but a new structure to their organization. The antagonists of Dawn of the Jedi don’t strike me as being as nuanced as those in Legacy, but it’s also the first issue of the run, so that’s not a really fair comparison, as much as I wish to draw it.

It’s hard to gauge just where the series will go or how well it will be executed off of just a single issue, but I’m satisfied with the creative team on the task and have high expectations for good things in this new series. If you’re a serious fan of Star Wars, I probably couldn’t talk you out of getting this, which I wouldn’t try to do anyway. If you are a more casual fan, the detail involved in just how complex things are, including a pretty large number of races, planets, etc., you may feel a bit overwhelmed. Still, if you think you’d enjoy reading a story about the origins of the Jedi, chances are you will.