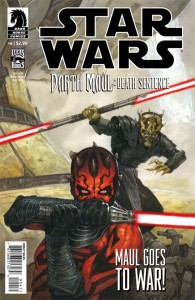 Halloween heralds the release of the fourth and final issue of the Darth Maul limited series, Death Sentence, from Dark Horse. The team has remained consistent throughout the short run, keeping Taylor on script, Redondo on art, and Atiyeh on colors. For anyone who may be a little behind the curve, this series follows the return of Darth Maul as detailed in the Clone Wars animated series. Darth Maul was rescued by Savage Opress, and now he’s angry, he’s hateful, and he’s fresh off a binge of bat crap insane… well, more insane than normal. He also has robot legs. I just like saying that. Robot legs. A Sith warrior with robot legs. In case you aren’t already sold on all four issues, let’s go ahead and look at this one.

I’m generally pretty critical about, well, everything, but definitely about the art itself. Keep that in mind when I say that this issue, and the limited run in general, is really pretty good. While the book never consistently presented art so good it forced you to stop and appreciate it, it did so often enough that when you finished the book, it was definitely a high point and an appreciably solid effort. The style itself is a plain and clean, using some heavy ink on shadows, but really utilizing line placement for lighter shadows and to convey agile movement. That said, there are some excellent uses of light and heavy shadows done throughout, to the point you will simply take a pause to appreciate how well it executed that precise moment. The frames are rigid and ordinary, which is unfortunate as that may be a limiting factor keeping the art at “very good” but shy of “great.”

The art’s strength is in the way it conveys the crucial moments in the story; the moments that make or break a good limited series by either causing the impact of the moment to resound, or to fall shallow and fade out. The best moments in this book rely almost exclusively on the art to carry that, and the it does remarkably well in doing so. People die without a word; without even being in the frame. In fact, the entire frame may only be the reaction of an onlooker, and maybe only their eyes. Making you care about what is happening only using such a small and non-central focus is something impressive. The book definitely has its high points, but it’s about 20% outstanding and 80% simply “good.” Those outstanding points are wonderful and the rest is good enough to keep me interested, but that’s the crux that defines a book with great art or not.

Bringing Maul back was no simple task for any writer to deal with, but keeping him as engaging a character after he is reintroduced into the universe is likely even more difficult. I’m happy to say that, as critical as SW fans can be, I’m definitely satisfied with where his character is headed. Handling popular characters, especially those presumed dead is very dangerous work, but the core of the character has remained intact, his essence clear, and his motivations understandable. And he has robot legs.

The biggest strength of the story is how it does a much better (or more adult?) job of handling the two sides of the Force. There are some clear put-personal-vendettas-behind-the-good-of-innocents-suffering choices, but that tends to happen to some degree just due to the material. What’s infinitely more interesting is the way the story handles a blurring of the lines, almost reminiscent of the way Legacy handled the subject. Is there justifiable hatred, how do you handle punishment, how do you deal with allowing threats to live with the potential for evil they possess, to what end is rage justifiable, and under what circumstances are good men allowed to kill? A lot of that grey area pops up in this comic and that’s, in my opinion, the biggest strength any Star Wars story has to build from.

There are some small inconsistencies, as you’d typically find, where” the physics of this situation makes no sense,” or” the coincidence of that encounter was awfully fortuitous,” but I suppose when you’re reading a comic book about people with laser swords who have invisible power… and robot legs… you can expect a few things to fall outside of expected logic.

Overall, the art has wonderful high points, the comic is dynamic and full of action, the difficult task of reintegrating a popular villain is handled commendably, and there is most definitely a jumping off point for continued adventures with JP… I mean… Darth Maul (if you don’t get Grandma’s Boy references, I don’t think we can be friends). If you’ve waited to see how the whole series turned out, I’d definitely recommend picking up all four issues. If you’ve read the first three, there’s no way to pass on this one. So, either way, go out, pick it up. It’s Halloween, new comic day, and … robot legs.