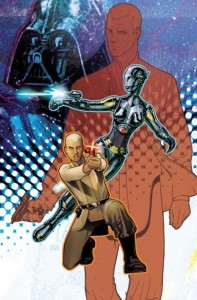 Star Wars Meets James Bond is how Agent of the Empire is being sold. Now if you are a James Bond fan, you’ll probably have flashback of Roger Moore driven Moonraker, which was the Bond franchise attempt of a Star Wars-esque film. But how does the opposite direction fare when you introduce a Bond-esque character to the Star Wars universe? Well based on the first issue, it is a mixed bag but has a ton of potential.

The beginning of the comic starts off very promising, if not a little bit like the start of Casino Royale. We are introduced to our main character, Jahan Cross, who is a spy for the Empire. When we first meet him, he is working undercover at a Empire production facility, and much like the start of Casino Royale, has been sent to track down a man who is double dealing information/goods to both sides.

The set-up isn’t as important as being introduced to Cross’ character properly. He is resourceful, cunning and witty, not unlike a certain British spy. But unlike Bond and his bag of gadgets, Cross comes equipped with his own robot companion, Inga. Who does everything from research to weapons when called into action.

After exchanging some banter with his target, Cross is attacked, and he springs into action. We learn that he is an excellent mark men and well Inga is really handy to keep around! However, we skip forward to Cross’ debriefing and find out that he may have been a bit too quick with the trigger. This is when the comic comes to a screeching halt though. As the next, 10 pages or so are dedicated really to offering backstory to the characters and the universe. During this scene, we learn that the book is set some time after Revenge of the Sith, but still before A New Hope. Which honestly, could have figured out without having it spelt out in the book or at least not in the first issue.

After some talking, we are led to the Q-branch of this series, which is an Imperial research crew that works on various projects including the robot companion, Inga, and a glider for pilots who have been shot down. Again, nothing too important, but was needed to advance the story.

The comic ends with Cross getting a new mission, and landing on a different planet where he runs into an old friend and some trouble. I won’t say much about this because it does feature some cool action and characters, fans of the series may recognize. The book doesn’t end on much of a cliffhanger, but it is interesting nonetheless.

The art in the book is pretty clean and solid. The faces look real nice, but that it kind of offset by the sparse backgrounds at times. Which would make sense if this took place in space, but most of it is planet-side. Great use of color throughout the book though.

New Reader Accessibility: 5– At this point, its really difficult for a first issue to get anything less than a 5. This book does a good job of introducing you to the major player, his environment and support group. It does spend too much time explaining things at the expense of pacing though.

Recommendation: Borrow It– Based on the premise, the book has a ton of potential. A lot of it was seen in the first scene, but kind of disappeared once the book spent 50% of its pages explaining everything to you. They should have either chopped it up a bit or thought about spreading it out over the series. The final scene is kind of interesting but also I can’t see them using that as a crutch all the time. Only time will tell.