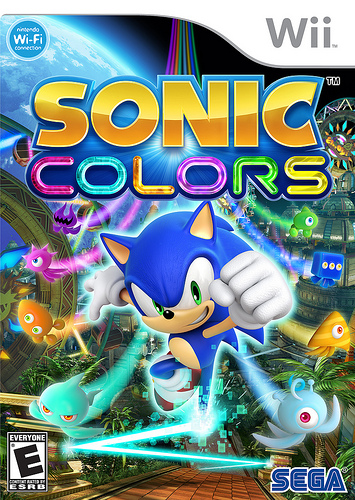 It has to be said. And yes, as an adult (at times!), it is something I should be ashamed of. I mean Sonic has let me down more times than any person in my private life. But even after a year of games that ranged from average to damn right terrible, I still love the blue hedgehog. Yes, I’ve played everything from Sonic Adventures to Sonic the Hedgehog on the PS3. And no matter how much those games disappoint me, I get excited for the next Sonic game. Its a really abusive relationship.

Why did I say all of that? Honestly, it needed to be said. And it also gives you the baseline of what to expect from this review.

And if I’m being upfront with you, I will also say that Sonic Colors isn’t just a good Sonic game. Its a really GOOD game in general. If you want, you could stop reading the review here. The rest will just be explaining why its a good game.

Now what makes Sonic Colors so good? The first thing, and probably most important to a LOT of people is this is a solo Sonic adventure. Yes, Tails is around, but he is only around for cut-scenes and to create some alien translator device. While not all of Sonic friends ruin the game, the mix of game play elements generally hurt the overall package. Can you say fishing with Big the Cat?

That however does not mean Sonic is on his own in the game. On the contrary, Sonic is helped out by several race (I’m not sure if that’s the right term here) of aliens called the Wisps. Now each wisp bestows Sonic with a special power for a limited duration. One allows Sonic to rocket high into the sky, another allows him to burrow deep underground (and is used pretty cleverly under water as well), and then there’s one that turns him into a giant monster that destroys most anything in his path.

And really the Wisps are what makes this game so damn good. I feel that this minor element finally allowed Sega to slow down Sonic, and say you know exploration can work in the franchise as well. Granted, you can still blast through stages as only Sonic can, and for the most part the game requires that early on, but you can also go back to stages as you unlock various Wisps to collect coins and Red coins, which unlocks even more stages. And finally if you collect em all, collects a certain special hedgehog. If you are a lifelong Sonic fan, you know who I’m talking about!

Weird how the brain works, but I talk about all of these elements that improve the core Sonic experience, but haven’t talked about the core Sonic experience yet. And while it isn’t the most solid 3D Sonic engine, I still feel the Adventure games did a slightly better job, it does work. And by that, I mean you are in control of Sonic. For anyone who had to suffer through Sonic the Hedgehog, you know just how bad the controls in the franchise got where you ended up fighting it more than anything else. And it is less on-rails than a lot of his other 3D games, which was another problem people had.

There are segments when you are given free reign which aren’t as tight as as other segments in the game. And they can cause headaches when trying to make precise jumps and the controls are just a tad loose, but nothing too game breaking.

The only other problem I had with the game play was the recycled boss battles. There are, I believe 7 boss battles in the entire game. Of those 7, 3 of them are repeated bosses just repainted and slightly tougher. When you have that few bosses, it just screams of laziness to re-use the design.

The Sonic series has always been known for its music. In the Genesis era, it was for the cool sounds and background music. In the 3D era, its generally for the cheesy main theme song, Sega seems to love (and I’ll be honest I love most of them as well). Â Sonic Colors strikes a fine balance. Yes, you get a cheesy main theme song, though still soooo good, but you also get some truly fantastic music. And if you remember early in the year when did my best of 2010 scores, Sonic Colors was high up there. While I won’t ruin the ending theme song, which is perhaps the best track in the game. I will share the main theme!

The graphics in the game are pretty damn good. And no, I won’t use the qualifier for a Wii game. Its a good looking game on any console in my opinion. Its bright, and has a ton of fun and interesting location. I mean, I’ve gone this whole review without saying it, but its the Sonic equivalent of the Super Mario Galaxy stages. One of my favorite stages in the game has you racing along giant hamburgers and donuts so there’s always that to look forward to!

Recommendation: Buy Like I said before, this is a truly fantastic experience. Hands down the best Sonic game since the Genesis era, one of the Wii’s brightest of 2010 and a top platformer for the generation. And thanks to the wonders of the internet, you can usually find it for around 20 bucks so there’s no reason not to give this a try.

Though, I did forget to mention, the core game is on the short side. Approximately like 5 hours or so to beat, but you’ll enjoy the entire trip!