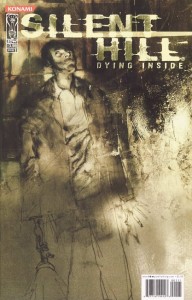 Much like a good piece of veal at a 5-star restaurant, the Silent Hill series has ruined me to the common fair of the video game landscape. For all of the quick-time events, cliched dialogue, and hour-long cut-scenes that modern video games force us to endure, it’s nice to know that there is a series of complex and challenging games waiting in the wings to wipe my mind clean. It’s not that Silent Hill is the cure for cancer or video gaming’s only saving grace, but it’s a solid example of what can happen when video game developers introduce symbolism and believable characters into their titles while valuing story-telling over gameplay mechanics. Silent Hill stands apart from most other video game franchises as each game’s symbolism and characters are still being deconstructed today. It could be argued that an IP with a taste for the atmospheric and a high level of detail would be well-suited for a comic book iteration, but Scott Ciencin’s ‘Dying Inside’ doesn’t really make a great case.

Released in 2004, Silent Hill: Dying Inside was the first Silent Hill mini-series published by IDW and had the dubious pleasure of switching artists from Ben Templesmith to Aadi Salman half-way through its run. There are those that would question my decision to analyze a comic series that has been out for 8 years, but it’s kind of an injustice that people who haven’t played the games or understand the series have been given a platform to critique the comics. There are many liberties taken with the Silent Hill universe here and a knowledgeable party really should be on-board to detail how off-the-mark ‘Dying Inside’ really is.

The series opens to a young girl trying to escape the murky-blackness of Silent Hill’s fog-world. A small girl that looks fairly reminiscent of Alessa stalks the escapee with a group of monsters until a shot-gun wielding stud comes to her rescue…I think. It’s hard to tell what’s going on as Ben Templesmith’s unique art style comes off as a half-finished blurry mess and character appearances change from panel to panel. People have tried to defend this art style in the context of Silent Hill, but I really don’t think it evokes the correct atmosphere. The tale cuts to Psychologist Dr.Troy Abernathy gripping with his wife’s death and providing us far too much exposition about the escapee from the opening scene – Lynn. She was attempting to take atmospheric stock-footage of Silent Hill before being trapped there and eventually escaping to the civilized world (where she now suffers from post-traumatic stress disorder and paranoid schizophrenia). Troy decides that the best way to treat this is to return to Silent Hill where she can face her problems directly. As you can imagine, things fall to sh*t as soon as they reach the ghost town. Troy runs into his dead wife (who is now parading about town as a Sexy Nurse), the pair are attacked by classic Silent Hill Dogs, Numb Bodies are seen scampering about, and Christabella (the small girl from the opening scene/my least favorite Silent Hill character EVER) spouts vulgarities and half-truths about the town. Their story continues down the same muddled path until Christabella (who is apparently insanely malicious and in complete control of the town) and her creatures corner the pair. Troy sacrifices himself and Lynn promptly hitch-hikes out of Silent Hill. In just two issues of a five part mini-series, both our leads are gone and Christabella is still in Silent Hill being a little b*tch. How do we rectify this? FOUND FOOTAGE. 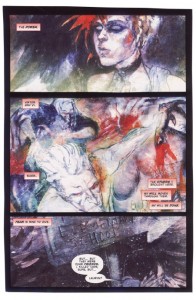 Issue three begins with a massive group of skinheads led by a former cheerleader named Lauryn traveling to Silent Hill after watching a tape they found with Lynn’s stock-footage. Bubblehead Nurses, Manikins, Insane Cancers, and Air Screamers are shoehorned in, but none of it feels natural. It’s revealed that Christabella is Lauryn’s little sister and she used Lynn’s footage as a means to lure Lauryn to Silent Hill. I would say that I’m happy that Christabella finally has a purpose for being in this series, but it still doesn’t make sense that Lynn and Troy would have seen her on their visits to the town.

The art-style change is welcomed though as Aadi Salman takes over with Issue three. Ben Templesmith is an excellent artist, but I’m not sure he was the right fit for Silent Hill. The atmospheric horror that the town generates is dependant on us first feeling comfortable in our surroundings; Ben’s sketchy art-style unfortunately made it hard to differentiate between when our leads were safe and when they were surrounded by monsters. Aadi on the other hand has more consistent character models, but unfortunately uses the same muggy depiction of the town (making it difficult at times to know what’s going on).

Lauryn uses the copy of some ancient text she bought off eBay to cast a spell in order to make Christabella vanish and put her soul to rest. It doesn’t work and the group of skinheads is soon on the run. At first I thought it was just Lauryn and about 6 other people, but it soon becomes apparent that she brought about 30 people to Silent Hill as there are packs of them everywhere. This is bad; Silent Hill is supposed to make you feel isolated and alone. Thankfully, dead Dr.Troy Abernathy pops out and kills a bunch of them…I think. Apparently “splorsh” = death. Troy psychoanalyzes for a while and we get a flashback to Christabella being lured away from Lauryn’s care by child molesters. This would have been a pretty neat back-story, but it’s never really expanded. This mini-series has a nasty habit of almost being interesting before it screws itself over.

As it turns out, Lauryn marked the 30 people she brought to Silent Hill and used them as cannon fodder. Once they die, the skinheads basically become zombies under Lauryn’s control. That’s right folks – our protagonist is completely unlikable. Lauryn’s friends are powerful and oddly thankful that they’re dead. Christabella gets pissed that Lauryn beat her at her own game and uses Lauryn’s f*cked up love-triangle with two of the skinheads against her. Lauryn makes a deal for their safety and things finally start to feel like Silent Hill as Lauryn tries to figure out a symbolic puzzle. Whately from the Order shows up and dies immediately while Lauryn solves the puzzle and gains complete control over the town. The comic ends with our terrible protagonist basically becoming god and no real resolution for anyone else involved. I wipe the vomit residue off my face and cringe at what has been done to my favorite franchise.

To understand why this mini-series antagonizes fans, let’s discuss why Silent Hill is a such great horror concept. The biggest strength of the series is the feeling of absolute isolation that a town which is completely indifferent and heartless towards your presence can generate. Silent Hill doesn’t care about what you look like on the surface or how you got there; it’s just an abandoned town that has the uncanny ability to bring up the past. It doesn’t try to kill everything that enters it and the people who do see creatures don’t typically see the same ones. James saw Sexy Nurses because he spent a lot of time in the hospital and was sexually frustrated because of his wife’s illness, Harry saw the Air Screamers because of an image in one of Alessa’s favorite books, and the Numb Bodies appeared to Heather as a result of her bearing the Order’s God in her womb. No two people will walk into the town on separate occasions and see the same creatures torment them. You can’t take things like Pyramid Heads and Lying Figures and shove them in every panel when they hold no significance to the people exploring Silent Hill. The town just gives your mind the gun – you’re the one who loads it, puts it to your temple and pulls the trigger.

This demonstrates the ongoing problem with the works of Scott Ciencin; it becomes pretty clear that he can’t write a solid Silent Hill story arc because he fundamentally doesn’t understand Silent Hill’s modus operandi. ‘Dying Inside’ is also hurt by the insane amount of exposition that is shoved into every panel to try and explain what’s going on. One of the benefits of using comics as your medium is that you can show us whats happening instead of telling us; having 4 paragraphs of narration in each panel just makes your artwork come-off as being inept. Unfortunately, the next 5 tales from Ciencin don’t get any better.