The ruthless ex-hitman Shank is back on Xbox Live Arcade, PlayStation Network, and PC for another round of hyper-violent 2D brawling This time the entry fee comes at a slightly more affordable price, launching at $10 or 800MSP (the original Shank launched at $15 and was only recently reduced to $10).Â Shank 2 might be the title of Klei Entertainment’s latest, but violence is the name of the game. The high-octane action is littered with spewing blood, dismembered limbs, vicious executions, and gratuitously graphic cutscenes. The bloodthirsty killing spree is powered by the game’s two biggest strengths: its combat system and fluid animated art style.

The distinctive aesthetic stands out immediately when booting up the game. Like the first game, Shank 2 features hand-drawn characters and backgrounds that have been digitally recreated. The high-res models move really fluidly despite the combat’s fast pace, and while the environment sometimes lack the eye-popping deal of the characters, overall the art style “pops,” providing for a very enjoyable visual experience (especially when throwing in the abundant violence). 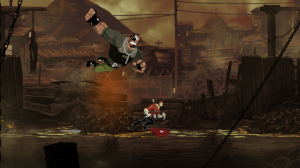 While the unique art style helps the game stand out, Shank 2‘s breadwinner is undoubtedly its gameplay. It’s easy to make comparisons to other downloadable 2D brawlers like Castle Crashers and Bloodrayne: Betrayal, but the game that drew the most immediate comparisons in my mind is actually Devil May Cry–albeit purely the gameplay, not the gothic milieu. This is because combat most revolves by juggling combinations of a light attack (Shank’s signature dual knives), a heavy attack (machetes, chainsaws, scythes, and sledgehammers), and projectiles (Shank starts with only throwing knives, but the quick acquisition of dual pistols and later a shotgun is where the Devil May Cry analogy really becomes evident). In addition to these three core attacks, Shank can also grab enemies, pounce on them from a distance, or lob an equipped munition (grenades, mines, or molotovs)–all of which can be combined with the standard attacks with lethal effect.

But wait, there’s more! New options open based on whether Shank and/or enemies are on the ground or in the air and triggerable environmental hazards make for a staggering number of variations in ways to inflict damage. This keeps the combat fresh and and engaging throughout despite very few changes to the actual formula. 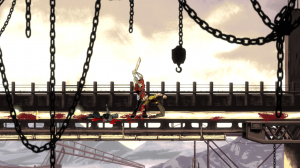 A slightly forgiving but fair checkpoint system ensures that you don’t get stuck replaying areas you’ve already cleared.Â Pacing is handled wonderfully throughout as the difficulty of fighting sections ratchets up and down as Shank progresses through the level while some light platforming and turret sequences help to break up the frantic pace even more.

And frantic is an understatement. This is by no means a “casual” brawler; Shank 2 will make you earn your progress. The difficulty isn’t overwhelming, but it does force you to learn and master the combat mechanics as you slice, dice, and shoot your way through each level. Each level’s boss proves the true test of how far you’ve come in learning some of the gameplay’s nuances rather than simply button-mashing your way through. Each time I was challenged by a boss I found myself repeatedly cursing in frustration, but it forced me to settle down and methodically decipher and then exploit the boss’s attack patterns. The result is a truly gratifying accomplishment, along with a couple sore thumbs. 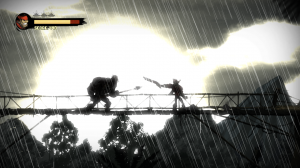 Where Shank 2 doesn’t fare as well is in the story department. Obviously, a game that is predicated mostly on its art style and combat mechanics doesn’t really need much in the way of context, only enough to keep things moving. The problem isn’t that Klei minimized story, it’s that it seems like they couldn’t decide whether or not to take it seriously. The underlying narrative follows Shank, a bitter ex-hitman jaded by betrayal and loss, who gets thrown into the midst of what appears to be a Latin American civil war. Many citizens are rising up against General Magnus, who rules with the same ruthless dictatorship as the drug cartels he had already overthrown. During the opening levels, Magnus’s goons burn a village to the ground and take hostages as candidates for a heart transplant to replace the general’s failing organ. While the premise is thoroughly interesting, it is also poorly communicated. Again, this shouldn’t really be much of a problem in this style of game, but when the story attempts to play off emotional relationships later on, the effect is muffled and hollow. 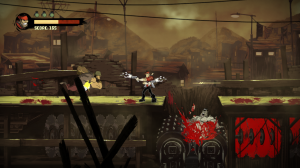 While I won’t delve into spoilers, the main motivation for Shank to chase after Magnus’s hostages appears to be some connection to an elderly woman named Elena. However, no context is given for this emotional connection and Shank is shown from the beginning to not be the type of guy to care about other people’s problems altruistically (he initially declines helping the rebellion). Throughout Shank’s journey, he’ll come across a variety of different enemies to fight against, but many of these–notably amazons and cannibals–are thrown in arbitrarily. They provide for a decent change in enemy behavior and visuals, but are totally unjustified from a narrative perspective. Shank also gets occasional assistance from some girl named Corina who he appears to have a past with, but this relationship again lacks any context for the player. More egregiously, one level has the player control Corina while Shank simply disappears, despite the fact that in the preceding and following cutscenes he is very much present. Corina actually has some nuances to her play style that differentiate her from Shank, so in that sense the level in question is satisfying, but it again lacks basis.

Again, it’s not necessarily a problem that Shank 2 lacks a strong narrative, it’s just that sometimes it feels like it’s trying to build one and then randomly decides, “fuck it.” That being said, there are some highlights, including some funny homages to Indiana Jones and a wholly satisfying final piece of dialogue after Magnus is defeated. 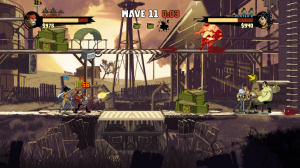 Klei has ensured a certain degree of replayability by allowing players to go back and used unlocked weapons and costumes in past levels–although a little more variety in the weapon selection could have strengthened the cause even more so. If going through the story again isn’t really your thing, Klei has also introduced a multiplayer “Survival Mode,” which is essentially Shank 2‘s take on co-operative, wave-based multiplayer. It provides an interesting distraction, especially you if have a friend to play with, and escalates both in difficulty and ridiculousness (in a good way) as it progresses. While the gameplay mechanics still shine in this mode, the onslaught of combat without the methodical pacing of the game’s story mode can be exhausting.

Recommendation: Buy It!Â If you’re looking for a 2D brawler that is more Devil May Cry than the whimsical exploits of Castle Crashers or The Simpsons, Shank 2 is assuredly the game for you. It combines a strong aesthetic with even stronger mechanics to create a wholly unique and enthralling experience. It doesn’t baby you or hold your hand, yet it also walks the fine line between challenge and frustration really well, encouraging the player to actually get better at using the mechanics rather than punishing them arbitrarily. That is not to say there aren’t frustrating sequences, but this frustration comes from simply not having your skills honed enough and often it’s just a matter of replaying that sequence four or five times until you master the techniques you need to press on. The game is supported by a narrative that is better than you might expect, but also nowhere near where it could be. However, that is a relatively minor blemish in context, and Shank 2 is exactly the type of game action fans should have in their digital libraries, especially considering it comes at the perfect price point.