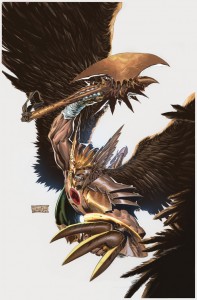 Synopsis- Carter Hall is a Cryptologist. With a team of other scientist, Carter hunts down alien artifacts on Earth. The other name he goes by is Hawkman. However, he is tired of that life and tries to put it to rest, going so far as to shoot his costume andÂ buryÂ it. On a dig site, a sample of a new found “Alien Mummie” brings about a new threat. What will Carter do when these inky, tar-like monsters attack? He’s not Hawkman anymore, or is he?

I wasn’t really going to pick this book up originally. I don’t really know much about Hawkman as a character. I just know his backstory was convoluted. I guess he was a policeman on some kind of Hawkworld or something.. and he kept getting reincarnated… and some kind of alien metal known as “Nth Metal” built into his wings allowed him to fly. All I know for sure from before the Relaunch, is he was a better supporting character than a lead. Not so with this new book.

The story starts off with Carter trying to rid himself of the Hawkman. Shooting his suit and burying it as a symbol of it’s death, the Nth Metal, Like aÂ phoenixÂ was reborn in a blaze of fire. It overtakes Carter Hall. Â This is pretty great because they don’t really bore you with all that convoluted back story at all. It’s as if Carter has the voice of many dc fans when he says “I’m done with it.”.

Meanwhile hisÂ Colleagues has found a sunken alien ship, that is much older than what they usually find. Carter is nowhere to be found. Apparently he’s pretty much the Indiana Jones of Alien artifacts. After being confused, and waking up over 90 miles away from where he was attacked by his suit, Carter eventually gets hooked back up with the other scientists/acheologists.

They have an Alien Mummie in stasis, and this is where things get ugly. Â I’m not going to give out any more spoilers. But the book gets kinda cool from here. Â There’s Â monsters that Carter has to fight. There’s also a bit of Suspense as the other scientists are trying to get away. the rest of the issue is a big Fight Scene. Again, No spoilers.

The Art in this book is ok. It’s a little too realistic for my taste, especially when no one is in costume. Â The characters are well drawn and haveÂ variedÂ body types. The colors, especially the backgrounds kind of look like they’re done with watercolors. All the Panels and splash pages are really easy to follow. The Dialog is done pretty well too. All teh characters are pretty believable.

I do like how they have made Hawkman/Carter Hall into such a layered character. Again, I’ve never read any of his solo titles before, but I find this version to be interesting. His personality is pretty great, and he’s willing to defend the weak. They changed his look up a little bit from before as well. He looks much more like a battle readyÂ Warrior, although his Talon on his left hand had me thinking of Wolverine. They changed his powers a little bit too, I don;t really want to spoil it though. This issue leaves on a pretty good cliffhanger.

SurvivalScale- I want it to live, but it will probably die. This issue doesn’t do too much explaining. Carter doesn’t even know the extent of what the Nth Metal can do. The action is good,Â characterÂ interaction is nice, and the art is ok.