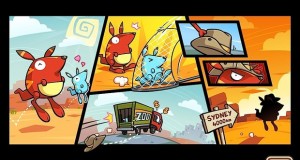 What if Canabalt, Scribblenauts, and Cut the Rope had some magical three-way baby? It would probably resemble Run Roo Run, the latest project from developer 5th Cell, known mostly for the aforementioned Scribblenauts and its iterations as well as Drawn to Life (and, apparently, a SEAL Team 6 game before the squad became “the guys that killed Osama”). Unlike the studio’s recent projects,Â Run Roo Run requires little in terms of the player’s creativity and instead takes aim at the short bursts of simple-yet-clever puzzles that tend to find success on a mobile platform like iOS.

For the unfamiliar, Run Roo Run has the player control the titular Roo (the kangaroo!) as he journeys across the Australian outback to his new home in Sydney. Perhaps that premise is giving the game a tad too much credit in the story department; this game is all about bite-size, moment-to-moment gameplay across a wide swath of levels. The goal is simple: guide Roo from the left side of the screen to the right side of the screen as quickly as possible while overcoming obstacles en route. 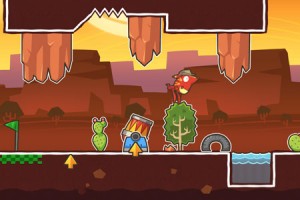 The typical gold medal time is sub-3 seconds, which gives you quite an idea of how fast-paced Run Roo Run‘s “micro-gameplay” really is.Â Each of the game’s 20 chapters introduces a new twist on the gameplay formula that becomes gradually more complicated over that chapter’s 15 levels (and now you get the Cut the Rope allusion). While the typical carrot of getting all the gold medals is certainly still in play, 5th Cell has added a further layer by adding 6 “Extreme” levels to every completed chapter that fully test the player’s understanding of the chapter’s new gameplay concept–and the quickness of their reflexes.

5th Cell also throws in free weekly level packs to encourage Runners to keep tapping into Run Roo Run on a regular basis, and they also offer the increasingly common microtransactions that allow players to purchase a free pass if they get stuck on a level (though in my experience, simple persistence is ample enough to progress). The entire formula resonates with the addictiveness that usually defines a popular iOS hit: you can play for literally 3 seconds or you can play for hours, and no matter what you’ll be having a good time. 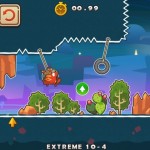 5th Cell has simply done a fantastic job of taking the basic mechanics of Canabalt, brewing it with a mix of level-based challenge and pace clearly inspired by Cut the Rope, and wrapping it all in theÂ whimsically distinct Scribblenauts aesthetic.

Perhaps best of all, such a simple game comes with a simple price: currently just 99 cents on iPhone/iTouch or $1.99 for the “HD” (aka iPad) version–though you can eventually expect the aggressive sales and price movement that are common on iOS. Don’t let the simple premise and budget price fool you, however; Run Roo Run has aÂ Mario-like level of quality to its unadulterated fun factor.