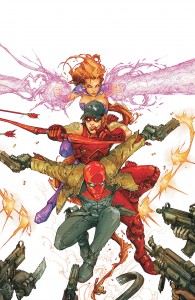 Synoposis- Â Roy Harper, AKA Arsenal AKA Red Arrow, is in trouble. He thought he could save the nation of Qurac from a brutal Dictator. Turns out the People were just as bad. Imprissioned, Jason Todd AKA The Red Hood, sets out to rescue him. Â With the help of an alien,Tamaanean, named Starfire the mission is successful. How will these characters Bond? What’s next on Todd’s Agenda? Why did they save Harper in the first place?

The Story starts off with a prison outbreak. Roy Harper has been working as aÂ soldier-of-fortune in the fictional middle-eastern country of Qurac. He’s been captured And The Red Hood is there to bust him out. We see Starfire, and she’s there to help. She’s a Tamaanean Â powerhouse and easily takes care of the tanks that are chasing our boys. That’s what the first Nine pages are about. Then we Skip to three weeks later.

At this point we see Harper, and Todd hanging out on the beach with Starfire, and we learn that Scott Lobdell has decided to make Starfire AKA Kori Anders a whore. They try to play it off as her alien-ness. She doesn’tÂ rememberÂ anyone from the past at all. Including her first love Dick Grayson, aka Nightwing. She decides to sleep with Harper. As a fan of this character, I’ve gotta say, they changed her a lot. She doesn’t have much of a personality, and just basically serves as eye Candy, and the only super-powered one on the team. It’s kind of a disservice to the character, really. JustÂ becauseÂ someone is hot, it doesn’t automatically make them a slut.

Another Character namedÂ Essence shows up too. Apparently Todd is the only one who can see her,and she looks cool. I guess she also has some history with him. She informs him ofÂ theirÂ next mission.Â It appears that a group going by the name of “The Untitled” have been taking organs from people years before they die. Who is this group? I have no idea.

There’s also a one page side story that has a guy hunched at a computer watching a video of Starfire that was taken earlier in the issue. Â He has threeÂ sentencesÂ of dialog: “A Tamaanean. On Earth. At last.” … I don’t know what that was about either. Why does he seem excited for an un-welcome alien to be roaming around on Earth?

I really like the Art in this book. Some of the paneling reminds me of theÂ ninetiesÂ comics. The characters are well drawn, But sometimes they have some extra lines that aren’t really needed, but that’s the style I guess. The disguise that Red Hood wears in theÂ beginningÂ had me thinking of Â Total Recall. The coloring is nice, but I have to wonder why they colored Starfire with a different technique. I mean I know she’s Orange, but it doesn’t quite fit in with the other people.

I really WANT to like this book, but the way Lobdell has handled Starfire really turns me off to it. Todd has some good lines, and I probably identify best with Harper here. The Action is nice, but the character interaction so far is not. I truley hope it improves quickly.

Survival Scale- Die, sadly. I don’t think enough people are going to care about these characters. The writer doesn’t apparently.

Recommendation – Â KILL IT WITH FIRE!