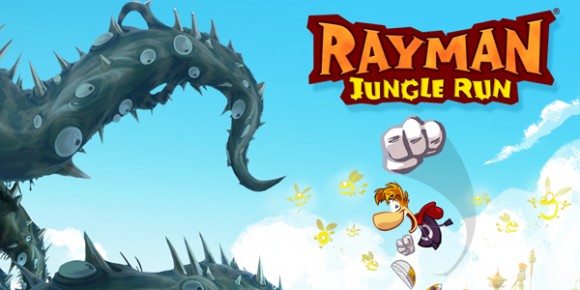 When you think of your typical iOS game, several words come to mind: casual, gimmicky, shallow, and cheap. When you think of an iOS installment of a “traditional” gaming series, several others also come to mind: cash-in, marketing, throwaway, and aggravating virtual buttons/sticks. So when Ubisoft announced that it was bringing its limbless mascot, Rayman, to Apple’s touch-controlled devices (and Android peers), it would not be hard to dismiss the title as sticking with any of the uninspiring adjectives listed above. 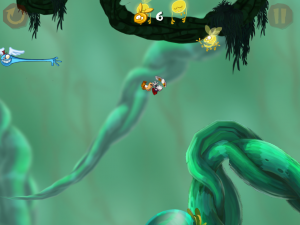 But as soon as you boot up Rayman Jungle Run, Â all your preconceptions are cast away immediately. The first thing that greets you is the stunning art style, powered by the same UbiArt Framework engine that brought to life the stellar Rayman Origins in 2011, as well as its upcoming Wii U-exclusive sequel, Rayman Legends. The art style has often been described as a painting come to life, but in truth that description undersells the recent Raymans’ (Raymen?)Â visual magic–and it has arguably never looked better than on the iPad’s personal 9.8″ display.

(Reviewer’s Note: While Rayman Jungle Run is also available on iPhone and Android platforms, this review was written based on the iPad version–iPad 2, to be precise. And despite the non-Retina resolution, all visual hyperbole still stands; if you do have a Retina-equipped iPad, you’re in for an even more breathtaking visual experience than has been heavily praised here) 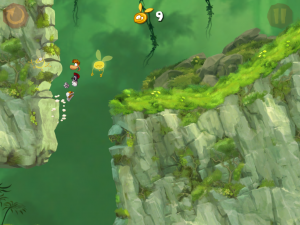 Throughout the game, Rayman continually impresses with its fresh art style, which uniquely embodies everything in the game, from the titular protagonist to the lively levels to even little things such as the design of menus and collectibles. It sort of goes without saying that with this many words on the art alone, it must be seen in person and in motion to be properly appreciated. Make no mistake, though: Rayman Jungle Run outclasses ALL other efforts on the iOS and Android platforms in terms of pure visual beauty.

While the jovial giddiness over the visuals never really wears off, they turn out to be matched by gameplay of an equally peerless quality on these platforms. The basic mechanics are built atop the “auto-run” technique popularized by CanabaltÂ and are infused with the timing-heavy puzzle platforming that Run Roo Run made so delightful. But labeling Jungle Run as simply another auto-run game skinned with some pretty graphics couldn’t be further off the mark. Yes, the first handful of levels (based wholly on the mechanics of simple tap-based jumping) give this impression of a simplistic time-waster, but the game rapidly evolves as it progresses. 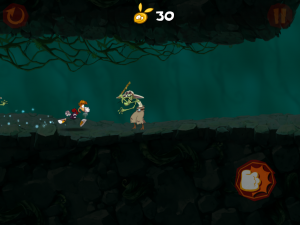 Despite lacking any tacticle buttons or control sticks, Rayman Jungle Run turns out to be every bit as complex and nuanced as its console brethren, demanding precise dexterity and timing combined with a mastery of the levels and the accrued abilities. InÂ fact,Â Jungle Run‘s mastery of touch and auto-run mechanics infuses it with a sense of speed that evokes a Genesis-era Sonic game better than anything the blue hedgehog has been apart of in the last decade and a half.

Jungle Run is able to introduce itself as a highly-approachable platformer for uninitiated newbies before evolving into the kind of gaming experience that one would normally need a 3DS or PS Vita for. Increasingly challenging levels test the player’s mastery of each of Rayman’s abilities. You will die a lot in this game as you come to grips with the design, but the experience never feels cheap or frustrating, and the game feeds the addictive “just one more try” characteristic of truly great platformers. The easy, instantaneous retry mechanic (think Trials EvolutionÂ or Super Meat Boy) only further feeds into the game’s pleasantly addictive nature. 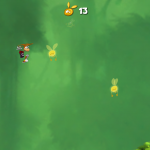 Once you have conquered the game’s standard progression of levels, Jungle Run encourages replay by daring you to collect all the items in each level in a “Perfect” run that takes the high-stakes exhiliration of its mechanics to new heights. Perfecting any 5 of 9 available levels in each world will also unlock that world’s 10th level: a challenge level in every sense of the word that pushes your skills and patience to the limit. The challenge levels also support GameCenter leaderboards on iOS, ensuring that the most diehard platformers will continue to chase the ever more perfect run through these diabolical trials. Achievements and a Gallery of unlockable artwork (all exportable for wallpapering) rounds out a truly impressive mobile package.

Rating: ACE — What begins as another simple touch-based sidescroller (albeit a gorgeous one) quickly morphs into a surprisingly complex platforming experience that outclasses its direct competition and earns its pedigree proudly. The requisite precision of dexterity and timing, as well as some level memorization, lead to an experience that feels worthy of any gaming platform yet truly capitalizes on the uniqueness of its own, without falling victim to any of the common shortcomings. The only perceivable knock on Rayman Jungle Run compared to the Marios of the platforming landscape is the relative brevity of the experience, but that is easily mitigated by the criminally low launch price of $2.99. The glorious artwork alone earns the price of admission, but the quality gameplay makes Rayman Jungle Run an instant hallmark of the iOS/Android gaming catalog.