After a disappointing start, Mass Effect – Homeworlds is out with a new issue, completing half of the four-issue run. While the first focused on James Vega, this second installment examines a small time frame in the history of Tali. Although not on the script, Mac Walters (the lead writer of Mass Effect 2 and 3) returns on the story, sharing space with Patrick Weekes. It’s a bit odd to have two people on “story” who aren’t on script (that was done by Jeremy Barlow), but only slightly less odd than having another person on pencils, Chris Staggs, then two people on inks, Marc Deering and Crhis Staggs, and another on colors, Michael Atiyeh. With additional people on lettering and standard/alternate cover art, there are quite a few people with their hands in this particular pie. 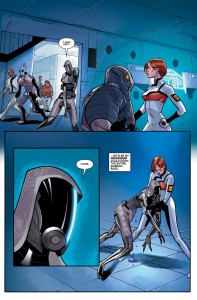 Unfortunately, I don’t have much good to say about this pie. Don’t get me wrong, I love Mass Effect. I have 100% the first two games and am well on my way to doing the same with the final installment of the trilogy. However, I have to be honest when things are pretty damn terrible. Mass Effect – Homeworlds was terrible when it first introduced issue one. I mean really, really terrible. Issue two… I’m just not sure if I can find the words. I love Tali, she is one of my favorite ME characters. This issue, however, has her (and everyone else) drawn as if it was illustrated by a four-year-old without their Ritalin. Everyone is drawn very, tragically, comically. People look like they are grabbing their crotches for no reason, proportions are way off, hell, there are people who actually look like they were illustrated by someone who has a fascination with Looney Toons. I know that sounds harsh, but it really is that bad. I can see what they were going for, a sort of more “comic” feel, but it just falls terribly, terribly short. On top of that, the colors are literally white, blue, purple, and orange. I’m not making that up. With the exception of a few red accents here or there, that’s the extent of the palette.

That said, let’s take a look at the story… this will actually take less time than the art. Warning this is a spoiler: Tali finds some information on a Geth unit she shot. Then she’s found out 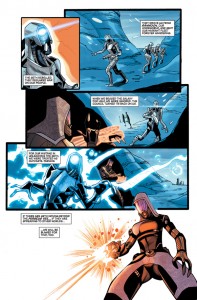 and runs away. The end. No, seriously that’s the whole story. That’s it. All of it. Twenty-four pages of it. If you’ve read the novels and played the games enthusiastically, you’ll actually see where this fits and can say, “Oh, so now I have a ridiculously comedic visual to the 2 sentences it took to explain that part of the story,” and then you’re done.

I’d really love to give you some more information, but that’s really all there is. If you want to read a comic about stuff in the ME universe that was clearly implied, and read that while seeing Tali drawn running like Archie trying to keep his hamburger away from Jughead, pick up this comic. If you would rather just splurge for that extra bacon on your burger for lunch, I’d recommend you go ahead and do that instead.