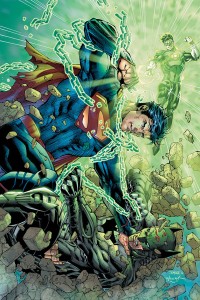 The Justice League comic series has a lot to live up to. Not only is it the comic that brings together some of the universe’s greatest characters, but it has also been positioned as the hallmark title of the DC New 52. Having that much weight put on you, could easily force lesser comics to crumble under the pressure, but like the heroes of the book, the comic rises to theÂ occasion.

Justice League 2 picks up moments after the first issue with Batman exhausting the stock of his Bat-belt in trying to take down Superman. As one would expect this doesn’t go too well for him, and Superman having enough finally decides to take the offense. It is a fairly one-sided fight as you would imagine.

I would just note, and I’m sure a lot of fans would agree, it is nice to see Batman and Superman for the first time again. After a while, Bruce is so ultra-prepared with his combination of K, that its nice to see him up against a Superman he doesn’t know how to take down. And of course, Superman shows some restrain which is why he never kills him in this comic.

Before Superman and Batman can conclude though, Hal rejoins the fray, and well as he is being portrayed as a cowboy in this series starts slinging his ring without much thought. As one would expect against Superman, this really doesn’t go well. So Hal finally decides to call in some back-up in the form of Barry Allen, The Flash. It is interesting to note, that the Flash and Green Lantern are the first characters we get confirmation of knowing each other before the events of Justice League. And it sounds like more than just random team-ups as they call each other by their first name.

One thing I want to note since didn’t touch on it at the start of the review is that Barry’s work at the police department is actually being hindered by the appearance of the Flash. It is kind of funny because he wants to do serious police work since you know probably doesn’t want to out himself as a superhero, but at the same time can’t while The Flash is being perceived as a threat.

The Flash rushes over to Metropolis and does battle with Superman. We see that The Flash easilyÂ out-speedsÂ Superman in the new continuity, or at least as far as this fight goes, but he gets just a tad bit cocky and ends up paying for it.

The entire time, the art in the opening of this book is fantastic. Jim Lee is really bringing his A-game to the book, and it shows, but I wanted to make a special note of the panels with Superman and The Flash. They were a visual treat, but especially the panel in which Superman finally outmaneuvers The Flash, I just love the expression on his face. I mean its one of those things that reminds you just how important visuals are to a comic.

Finally cooler heads prevail (aka Batman talks sense into people), but before the heroes can get to the heart of the matter, the police are on their tail. So they all make a quick exit into the sewers. I guess making them literally underground heroes (sorry I had to)

We cut away from Superman, Batman, The Flash and Green Lantern to head over to S.T.A.R Labs, where we see Victor’s dad hard at work on the Boom Tube (though not named yet obviously) before Victor shows up a bit disappointed that his dad missed another game. In a somewhat sad scene, Vic’s dad explains why his footballÂ abilitiesÂ are meaningless in the modern world. When you have men capable of leaping tall bounds or running at the speed of sound, catching a ball doesn’t seem that impressive.

After this, stuff goes wrong in both stories, and that leads to our cliffhanger!

As noted before, the art in this book is really strong. Perhaps some of the best art work on display in DC’s New 52. I love the look of the characters, I love the colors and I love the visual information and nods thrown around on the panels. I mean you can pick up the book for a solid story or for fantastic art but either way you are in for a treat.

New Reader Accessibility: 4– Seems to be the theme of the month. Most of these second issues are still relatively easy to get into, but they do build on elements debut in the first issue so it helps if you’ve read it. This works just as well as a jumping on point.

Recommendation: Buy It– This is what a good superhero comic can be. You get a ton of action with various different superpowers. You get colorful pages and a well-paced issue with a solid cliffhanger!