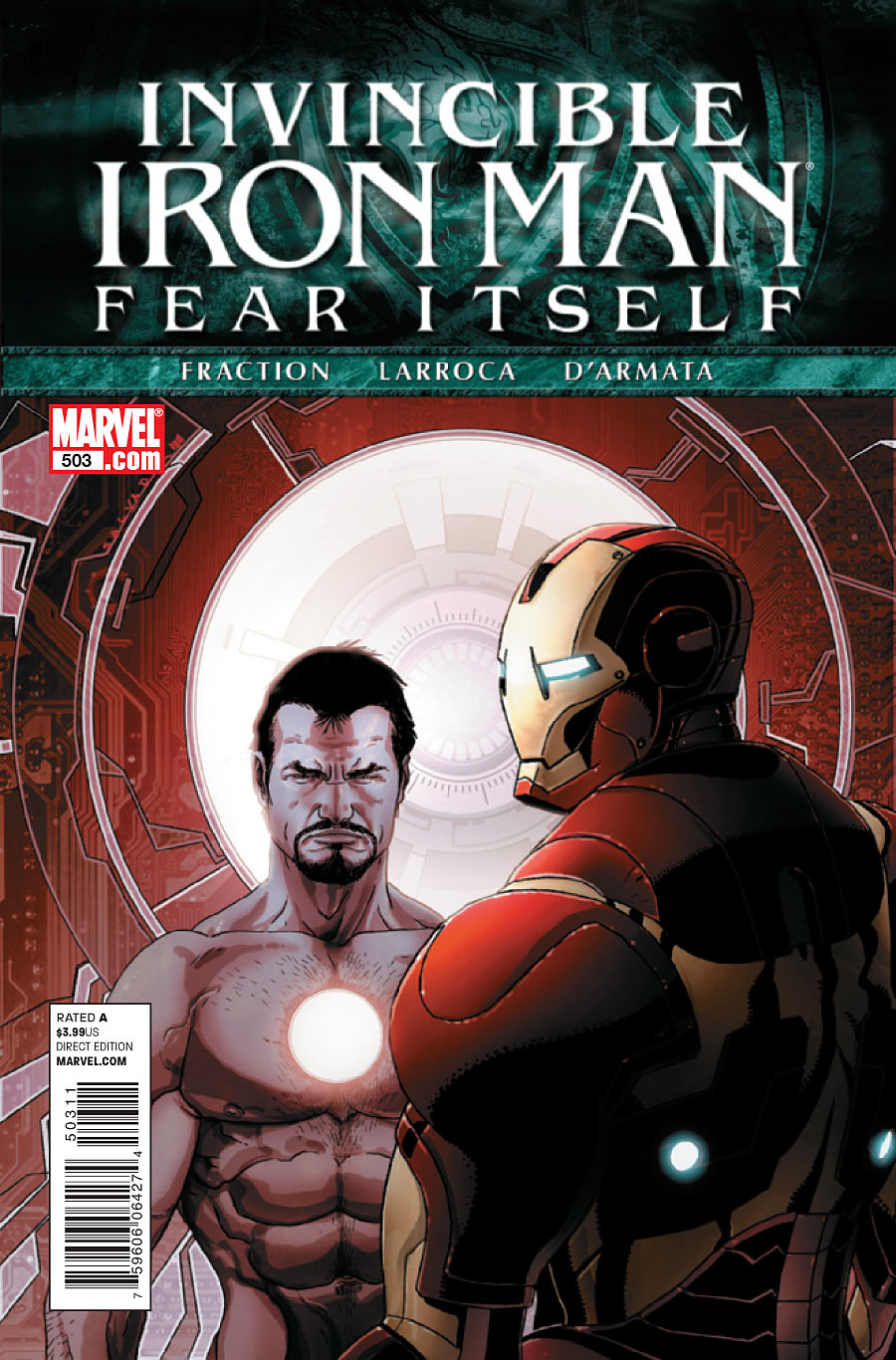 Cover by Larroca and D’Armata

The Invincible Iron Man #503 continues the “Fix Me” story from issues 501 and 502, which pits Tony against a dying Doc Ock who wants nothing more than for Tony to admit Otto is better than him, and also follows Pepper as she battles Sandman and Electro.

I’m a HUGE fan of this current team of Fraction, Larroca and D’Armata, and as usual, I’m not disappointed with this month’s taste of Iron Man. Fraction’s writing is as good and witty as ever, and he has a nice back-up this month called “How I Met Your Mother” with great art by Howard Chaykin that’s a real treat. Larroca’s pencils are still sharp, and Armata’s colours compliment the work very well, making another beautiful issue of Iron Man. The flashback sequence that opens the issue really does give you the feeling that it’s from years back, thanks to some different styles by the art duo. As great as their regular art is, the standout of each issue is usually the Iron Man armor itself, and here’s no different. Tony is using a thinner version of his “Bleeding Edge” armor here to reduce repulsor emissions, and it looks really darn cool.

So, now I want to take a minute and talk about the plot, hopefully without spoiling it. Overall, I really enjoyed this three issue arc, and although it does get wrapped up in a way you’ll probably see coming, I’m not going to knock it much for that. If there’s one thing I found odd about the plot though, it’s the Fear Itself tie-in at the end. Without exactly spoiling for it, I just found it odd that it tie’s in a pretty small way to the opening of Fear Itself #1, which may not sound weird, but I thought it was considering Fear Itself came out weeks ago and it says “to be continued in the pages of Fear Itself #1…”, but I digress. This was an enjoyable little arc and it was pretty cool to see Tony and Doc Ock match wits.

New Reader Accessibility Rating: 7 As I mentioned before this is the last issue of a three part story, but you shouldn’t be too lost thanks to the recap page. And despite the cover having Fear Itself on it, you’ll be fine if you haven’t read Fear Itself #1. Thanks to the nice back-up, I really do recommend this though since you won’t want to miss out on that, and if you’re not reading The Invincible Iron Man, you really ought to be.