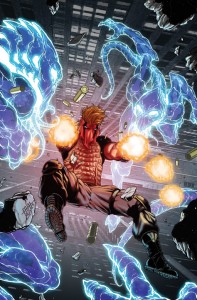 My first exposure to Grifter was the WildC.A.T.S. animated series from 1994. I don’t remember the series, but I remember liking him. So, when I found out about Grifter coming to the DCnU, I was excited. It was great seeing him in Flashpoint, but now he has his own adventure.

I can say that a lot but not a lot happens in this issue. We have some evidence of Grifter’s telepathy, but he’s only picking up thoughts of these alien creatures that want to kill him (one actually tries, but, you know, that doesn’t work out for her). I’d like to assume the aliens are the Daemonites from WildC.A.T.S. but I’m not sure and I don’t know that much about them to begin with. Anywho, we have some non-linear storytelling as we go back in time to the point Cole (Grifter) was taken by the aliens and given his powers. He was abducted for what he believes is 17 minutes, but his associate quickly points out to him he was gone for 17 days (what?). His actions on the plane caught the media’s attention, so they are out to get him, with his military brother leading the charge to cover the military’s ass (Grifter’s association with his brother will, for some reason, make the military look bad). At the end of the issue, Grifter dons his mask as the first step in an attempt to get the last 17 hours of his life back (what?).

This issue was different than I expected. I expected much more action, psychic abilities, and guns. Definitely guns. However, there was only minimal telepathy. I was upset until I realized that just because I have some minimal exposure to Grifter doesn’t mean others do, even those that already read DC comics. So, this issue was a good step in introducing Grifter. The same tactic could have been used for Static, but Static’s animated series had far more exposure and longevity than WildC.A.T.S., so there may not have been as much of a need to formally introduce him.

We have some evidence of Cole’s life before his abduction. Namely, in the absence of any superhuman abilities, he is an amazing con artist. Hopefully, this trait will pop up later in the series. It’s always awesome to see meta characters with abilities that don’t relate to their superpowers (charm, persuasiveness, investigative abilities, etc).

Cafu’s art is very nice, clean and structured, and I love that. It has the right amount of detail and captures all that it’s supposed to out of the characters. Edmonson’s writing is pretty good, too. He manages to use a non-linear storyline for this issue and make it work. There are some inconsistencies with time , but I have a feeling they will be touched on later in the series; they seemed very deliberate.

Live or Die: Life Support — I like Grifter a lot and I’m willing to read it to see what happens, but I’m not quite sure this issue gives readers as much to go on. Yes, Grifter wants to get his life back and find out what happened to him, but the end of his issue seems much more resolute than the other DCnU titles I’ve read so far, and that bothers me. There are questions, but it didn’t end with a big bang. However, this could just be to get new readers acquainted with Grifter.

Recommendation: Read It — At least read Grifter to see if you might like it. I feel like the second issue is where I’d say ‘Buy It’; this first issue just gives you a bit of backstory with not much action. The biggest piece of information is that Grifter was abducted and he is now being hunted by the military, not much more (and those aren’t even much of spoilers). Hopefully, we will get much more action and story in the next issue.