I really need to stop giving a time frame for these projects so much other stuff comes up that things just slip my mind. That said, I am still keeping my promise to review original and very different in this case comics.

Today we take a look at Wiebe and Rossmo’s Green Wake. An extremely interesting comic both in concept and in art. Like the last comic, Nonplayer, this is also an Image comic release.

I’m not really sure where to start with this comic because honestly, I’m not even sure what I just read. I mean the comic seems to be going for a very noir style both in execution and design, but there seems to be a bigger concept at large, which I’m probably missing. From what I gathered, the town is a collective, massive hangover for people. Like people get extremely plastered, and wake up in a mysterious town that they can’t seem to leave. The only exit… seems to be to get high.. or at least, I think that’s what I gathered. Like I said, its an interesting comic. I am tempted to stick with it just to see how everything unfolds.

While the mystery of Green Wake drives the book, and I assume the series. There is also another plot at work as there are two murders committed in the span of a single night (though according to the narrative, it is always night in Green Wake), and the prime suspect has fleed town, while at the same time a new-comer with a past relationship to her has just arrived. There are also two detectives/protectors who are on the case. And really, I feel like I’ve spoiled enough of the book already.

Much like the plot/concept of the series, the art is something else entirely. As I read the issue, my mind kept flip flopping between a dislike and love for the style. Even now, I still haven’t settled on a proper opinion of it. Sometimes, the art comes off as chaotic and dark and mysterious and it works. Other times it comes off as unfinished, and rough and it doesn’t work as well for me. I’m sure both styles are done intentionally to give a certain feel to the story, but that doesn’t mean I have to like it.

A piece of art from the comic that I really loved. I thought the imagery and use of color was amazing. And I wanted to pick a panel from early in the book so not too ruin too much. Though, I guess its saying something when I don’t think the character shows up again during the issue. 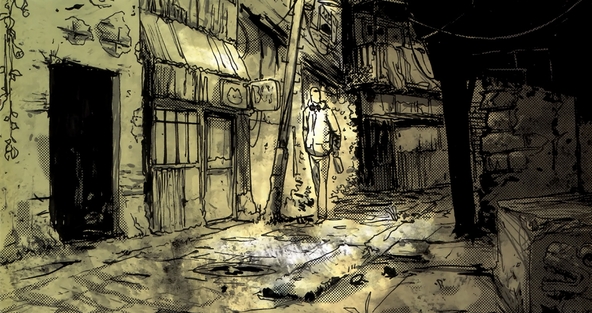 On the other hand, an example of the art that I didn’t care much for. I wanted to include one with more characters, but again didn’t want to give away too much. Not the best example I realize, but when playing it safe only so much ammo!

Recommendation: Wait/Rental This is a tough one to call. Like I said before, I’m really tempted to check out the rest of the series to see how it all comes together, which is generally a good sign for the series, but at the same hand, I didn’t much care for this issue. The art style was too inconsistent, and I felt like one or two more details would have really helped me get more engrossed into the world and the universe.

That said, it has a ton of potential, and it is only 5 issues so it isn’t a HUGE investment at 3.50 a pop. We shall see how issue 2 goes.

New Reader Accessibility: 3 This is odd for a first issue, but being I don’t know how this series will go nor does it give the reader ample details to make them curious enough gonna plant this firmly in the middle of the road.