War, war never changes. Is a quote you can usually find ironically used in the Call of Duty franchise, but it is also fitting here. The War of the Green Lanterns is now brewing. And after a double shot opening last week, the war seemed to be firing on all cylinders. Until Emerald Warriors 8 that is, the war apparently has come to a halt to remind us of things we only discovered a week ago.

The biggest problem I have with this issue is it re-treads a lot of old ground quickly. We are once again show that Parallex has entered the Green Battery and has taken control of almost every Green Lantern. It is once again explained that Kyle, Hal, Guy, John and Kilowig are immuned to his powers since they had already been corrupted by him. And finally, we are once again shown a battle between two Green Lanterns who are slowly succumbing to his power.

There’s nothing new or exciting about any of these story arcs either. Perhaps, it is because Emerald Warriors as a whole hasn’t been too enticing to me, or maybe Tomasi just doesn’t handle the characters as well, but I just felt bored throughout this entire issue.

It doesn’t help that the writing and the art in this book aren’t that strong either. Most of the dialog seems to be exposition explaining what has been going on in the book to Hal and then some explanation as to what Hal’s been doing in his own book. Then there’s the fight scene, which just has some awful exchanges.

Even some of that could have been forgiven if I cared for the art in the book, but it was distracting. Especially the design of Hal for some reason. 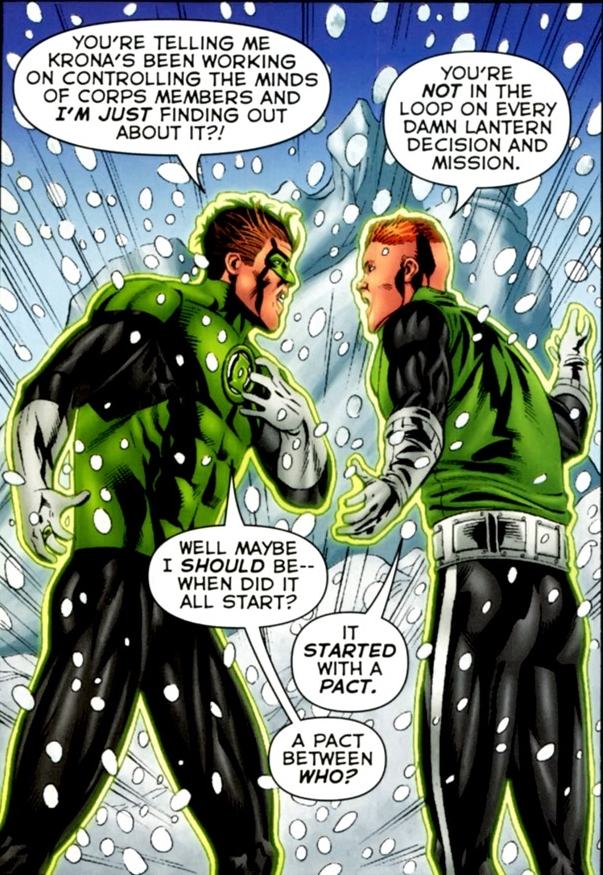 The panel above was the one where I really noticed how odd the artist drew Hal. I mean there’s no reason for his face to be stretched so oddly. And it still bothers me just looking at it. The whole style just doesn’t seem to fit the characters.

I hate to be completely negative because someone out there actually worked extremely hard on this comic so I will say I LOVED this panel of the various version of Guy through the years attacking Hal. Actually, the Green Lantern fight visually was a treat for the eyes. Sadly, there was also dialog involved in that scene. And some of it was extremely cringe-worthy.

This is a tough issue to recommend. I mean I wouldn’t recommend it at all personally, but if you are reading the War of the Green Lantern storyline, it is probably needed, though so little happens here that you could probably skip it.

Another note I wanted to add, which doesn’t reflect on the quality of the issue as much as the series, but after Blackest Night we ended up with 3 distinct GL books. Green Lantern which focused on Hal, Corps which focused on John and Kyle and then Emerald Warriors which focused on Guy, but now that Guy’s done his own side mission, and really has been reunited with Halo, I don’t get the purpose of continuing Emerald Warriors, but we shall see what the future holds.

New Reader Accessibility: 4 I mean it is the 3rd part of an on-going saga so those will always score low, but it does a decent enough job on catching you up on all the events through dialog. The problem is not the best issue to start with because it isn’t that good.