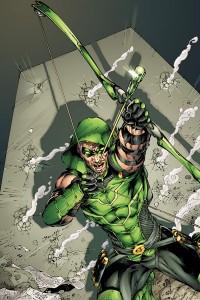 Green Arrow 1 was an interesting book in the initial New 52 month, as far as I could tell, I was one of the people who really enjoyed the tale. A younger, more hip Oliver Queen was on-board, and the story was a much lighter-fare than the rest of the comic offering. Does issue 2 still shine bright as a beacon or was all my hope false?

Green Arrow picks up, well not immediately after the last issue, but somewhat related to it. Two of the villainness who broke the prisoners out at the end of the last issue are running amok and they finally enter Seattle where they do battle with Green Arrow. They are quickly bested though, and we switch to Olivier in his civilian life. As I noted in the previous review, this book sort of works like Batman Begins to me where you have a corporate villain and a more over-the top comic book-esque villain. Here we find that Olivier is in danger of using his position at the company due to his many adventures as Green Arrow getting in the way of his productivity.

While this is going on, the team of villains from the end of last issue are having their let’s plan evil meeting (we know it happens!) and hatch their latest plans to destroy Green Arrow. With a slight twist since this is the modern era, they plan to stream this to the entire world because hey its a Youtube sensation waiting to happen!

The issue ends with Green Arrow finally crossing paths with them and we are left to wonder, what will become of our Emerald Archer! :O

The series continues to work for me, and after this one, I finally realize why. Green Arrow is James Bond in a comic form. He has his own Q-branch called Q-Core. He has a ton of gadgets which are made by a man in a lab, who probably wants them for practical applications but never quite turn out that way. There is of course globe-trotting adventures to be had and witty back and forth between hero and villains alike. It really is a light-hearted and fun-filled adventure book at this point, and I hope it continues because I’m really digging the vibe.

The art continues to be solid all around. None of the panels really stood out to me as being special, but want to give a special nod to the Arrow Cove. I don’t really know the name, but his little tech center, I always love seen those images in comics, with multiple video screens in the background. Its a nice touch.

New Reader Accessibility: 4– Its only the second issue of the run, and all the important stuff from issue 1 is recapped during dialogue exchanges so you won’t be missing much.

Recommendation: Buy It– It is a very fun read, and its a good time!