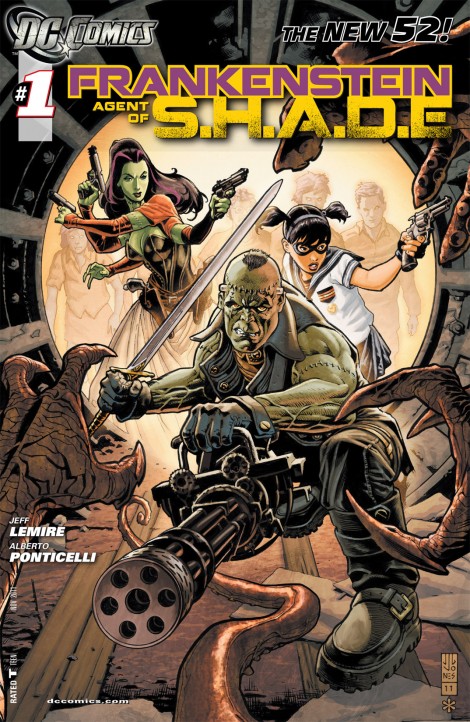 My main criticism of Justice League #1 was that it was too much of a slow burner for a first issue. I wanted to see the full team formation. If you wanted the same as me from Justice League #1, you’ll really enjoy Frankenstein: Agent of S.H.A.D.E #1.

That’s quite a bit to take in, and does mean that this issue is a bit of a dense read, but that doesn’t come at the expense of anything that’s included in the issue.

The introduction of S.H.A.D.E is helped by the fact that this is also Frankenstein’s first encounter with the organisation. This means that the reader learns about the organisation at the same time the main character does. There’s nothing groundbreaking or new about that use of storytelling, but it does help ease readers, especially new readers, into the book.

When it comes to meeting his team, not a lot of time is spent on each character individually. Instead, we get caption box introductions, courtesy of S.H.A.D.E. NET. This is a quick and easy way of introducing the characters, and didn’t stop the momentum of the comic, which was pretty tightly paced. I’m also going to assume that parts of each character’s back story will be covered in future issues.

The art has a kind of 80’s look to it, which really goes well with the character and story. There are some two page spreads that I wanted to pop off the page a bit more, but there’s really tight detail in them, so I can’t really complain.

I think, as far as first issues go, this does a good job at setting up what the title will involve: monsters beating up more monsters, with some spy stuff and guns thrown in for more fun. And it is fun, good fun.

Survival rating: Live. There’s a lot of potential for this book. I’m really looking forward to seeing where it goes.