Whenever a comic book event gets announced nowadays, I can’t help but hear the Jaws theme playing in the back of my head. A predator of my wallet is fast-approaching. Sure, we know that’s why companies do these big events, but they can also be rather fun.

Though there is an inherit risk in starting a mega-event. On the extreme positive side, you have the potential for a fun-ride that encapsulates the entire universe and you get swept up in its momentum buying all the tie-ins. Then there’s the other extreme in which a story really isn’t too your liking so you skip it and feel alienated from the rest of the universe as you wait out its conclusion.

Marvel has already started its big summer event with Fear Itself , and now DC is entering the ring with Flashpoint. How does the first issue in the series fare? Is it worth sticking around for? Why am I asking questions in the middle of a review?

Flashpoint 1 is an interesting entry point into the DC Universe. While the story has been set up over the course of a year in the Flash series, you really don’t need to know much of what happened in those books to understand the first issue. I’m sure some people will complain about wasting their time with The Flash and all that jazz, but people complain about everything, and personally The Flash was an awesome ride for the past year.

With that said, it is like I mentioned above, an interesting jumping on point for a new reader. In so much that you’d probably have to understand the DC universe to know what’s changed, but it doesn’t really ruin the flow of the comic itself.

What about the comic though? Well, I’m happy to say that Flashpoint 1 is off to a bang. The first issue pretty much has events well into motion, and we discover what’s happening or has been happening through interactions with various characters and of course our main hero, Barry Allen. You’ll notice I didn’t say The Flash, and there’s a good reason for that.

There are perhaps tougher ways to find out you no longer have superpowers, but there probably aren’t many moreÂ embarrassing. Yes due to some time-travelingÂ malarkey, Barry Allen has been set-up in an alternate DC time stream where his mother never died and apparently he never gained the abilities of the Flash. Generally, I avoid spoilers but much of this is explained within the first few pages, which I think is fair game.

Aside from Allen never becoming The Flash, several other characters find themselves in vastly different roles. The biggest two don’t even make an appearance in this issue, but are the driving force behind the main action plot of the series it would seem. This I won’t spoil however as you’ll have to read to find out.

More interesting to me, is that even the characters you do know, may not be the characters you know. Captain Cold is Citizen Cold in this series and a hero to his fair city, though not everyone buys that story, and he isn’t the only one.

If you can brush aside the mountain of words, I really did enjoy the first issue of Flashpoint. Its an intriguing concept, though time-altering is a staple of comic books and even television shows so its nothing new. But it has set-up quite a fun ride and the cliffhanger really caught me by surprise, and I eagerly anticipate reading the 2nd issue.

The art at the same time is truly awesome (I need new adjectives, or maybe comic artists need to be less amazing these days, who knows!). I mean some of the pages just jump to life, and the touching moments are done really well. It is tough to forget that comics are a visual medium, but sometimes artist don’t use the full panel to really bring to life the story. This issue makes great use of characters’ eyes to tell a story. Take this panel for instance:

I mean there’s so much going on in that panel, and it all works for me. The way his eyes fill with emotion. The reflection of his mother in his eyes. Everything just comes together so magnificently. And that’s not the only time the issue does something like this. But I won’t ruin the others especially since they tie into key story points.

The use of facial expressions isn’t the only stand-out work in this comic. The use of colors is also very nice. And I’m not sure if intentional or just because the nature of location, but the story takes off with an extremely colorful and vibrant splash page 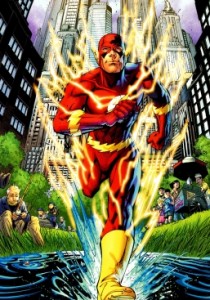 And by the time you reach the conclusion, all of the vibrant colors have been wiped out. Replaced with more drab and murky colors, and while its more of a stereotype there’s also rain!

As if you expected anything different after I spent hundreds of words swooning over the issue. It truly does feel special from the word go, and while my opinion may change over the course of the series, the starting point is pretty damn awesome.

Like I said before, the series doesn’t really need you to know what’s been happening in The Flash for the past year, and while that may piss some Flash fans off, it really is a great place for someone to start. And the way DC has set-up their tie-ins, it feels like you can sustain yourself for a few months just in this special universe.