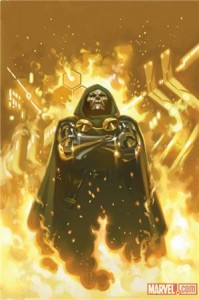 When you look at the first page of FF #2, you see the size of the cast Jonathan Hickman has to use in the title. There are 16 characters in total, and that’s not including whoever might guest appear in an issue. That’s a pretty big team, and I think one of Hickman’s talents as a write is that he can handle it well. In this issue, he gives most of these characters their own moments, and still manages to move forward with his story. This doesn’t mean that Spider-man is on every page, because he isn’t. The reason for that is: it’s not a Spider-man book, it’s a Future Foundation book, so if you’re reading this title purely because Spider-man is in it then, well, you’re probably going to be disappointed. However, he is used as part of the team. This issue introduces us to ‘The Room’. ‘The Room’ looks like its going to be a kind of ‘think-tank’ for the Future Foundation. Spider-man is involved in this scene. The team are discussing how to fix Doctor Doom’s brain. Spider-man is involved in the discussion, which shows the more ‘science nerd’ side to his character, which I really liked because it’s something we can not see a lot of.

In keeping with making good use of his characters, this issue see’s The Thing and Dragon Man head to a bar. The Thing is angry about Doctor Doom being a part of the Future Foundation, and since he can’t brawl with him, he decides to just head down the pub. He takes Dragon Man along as his drinking buddy. I think it makes sense that The Thing would head to a bar, given his character, the development with Doom, and also giving the fact that he’s recently lost his best friend. When the issue starts, we immediately see his moment of rage and anger when he hears that Doom will be joining the Future Foundation. When I first read it, this seemed like an odd way to start an issue, but the next couple of pages helped it make more sense. I also love seeing The Thing and Doctor Doom giving each other quips. 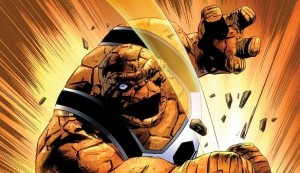 So far, I’ve mentioned Doctor Doom quite a lot. That’s because he’s a pretty big part of the issue. The issue is about the team fixing his brain. When I first heard that Doctor Doom would be a member of the Future Foundation, I wasn’t sure at all how it would work. I’m sure Hickman is subtly plotting towards Doom turning on the top, though that seems like the most obvious way to go, so it’s more likely to be something completely different. He’s a great character though, and him being on the team, and in the book in general, add to both being a lot more fun.

Art wise, we don’t get anything overly exciting until the end of the issue, when Doom is back to full force. An early moment, that does look great though, is when Susan stops The Thing from attacking Doom.

I think in this issue, Hickman manages to give a lot of characters good moments, and manages to move his story forward. For me, that’s a sign of good writing. Two issues along, and, for me, this book has been great.

New Reader Accessibility Rating: 8. As long as your questions after reading aren’t “Why is Spider-man on the team?” I think this issue does a good job at answering, within the 22 pages, any questions you might have. An example of which is a quick mention of what Doom’s mind is about, and why The Thing is so pissed off at the beginning of the issue.