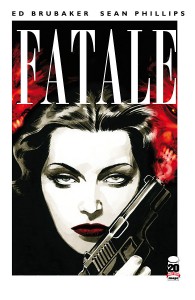 Fatale is a brand new, creator owned, maxi series, published by Image Comics. The creative team behind Criminal and Incognito are back, with a new story about guns, sex, secret cults and monsters!

The issue begins in 2012, with the funeral of Dominic H. Raines, a character we learn more about as the issue progresses. Attending the funeral is his Godson, and only apparent living relative, Nicolas Lash. Raines was a successful writer, and when he died, he left his estate to Nicolas. It’s during the funeral that the mysteries of Fatale begin to unfold, because it’s where Nicolas meets Jo. Her Grandmother apparently knew Dominic back in the 50’s, but Nicolas is suspicious that there’s more too it then that.

That evening, Nicolas pays a visit to Dominic’s old place, were he finds an old unpublished manuscript of Dominic’s. He also encounters two strange unknown figures, carrying weapons. Nicolas is rightfully worried, because this isn’t a tale of superheroes. Much like Brubaker and Philips ‘Criminal’ series, Fatale is a story of ordinary people thrown, into less than ordinary situations. Thankfully for Nicolas, Jo is there to save his back. 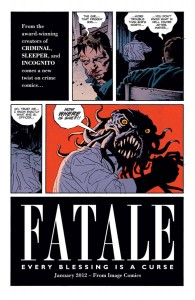 Once Nicolas and Jo escape, we cut to 1956, were we also have a new narrator. It’s never clear if the narrator of the 1956 scenes is Nicolas reading Dominic’s old manuscript, or if it is indeed just a narrator. This is something we may not find out until the end of the series. In the 50’s we’re introduced to Josephine and a young Dominic. Josephine’s character design is strikingly similar to Jo’s in 2012, because they’re the same character. This is one of the mysteries of Fatale: who is this woman? Is she good or bad? We’re going to have to wait until future issues to find, and I think the first issue is enough of a hook to want people to come back.

The last quarter of the comic is where we’re introduced to the cult and horror elements of the story, which is what makes Fatale different from the creators other works. At it’s heart, Fatale is a horror story. But it wouldn’t be an Ed Brubaker and Sean Philips story without elements of pulp and noir, which means that the aspiring cult leader is also a gangster. This is an interesting twist, which makes the main antagonist of the series more threatening.

With his art, Sean Philips keeps to the classic panel layout, in having 6, 8 or sometimes 9 panels to a page. He could keep to this pattern throughout the series, which would be fine because it gives the story a classic feel, especially the 50’s scene. Or, when we go deeper into the horror and more obscure plot elements of the story, he could chose to break these conventions he’s set up in the first issue. The colour palate is dark, lots of blues and blacks and greys, perfect for the story. When you first open the issue, it looks like the next arc of Criminal, but by the end, you know you’re reading something new and different.

I really enjoyed this issue. I’m a fan of Brubaker and Philips, and very excited for future issues of this series. They haven’t really touched on horror all that much, so it should be fun to read.

Recommendation: Buy it. (Digital or Print).

*Editors Note: I read the issue digitally (on grapicly) and thanks to Philips panel layouts, it read fine. I’m now considering reading the whole series digitally.