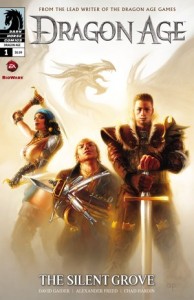 From the Dragon Age games comes a new comic series from Dark Horse, The Silent Grove. It’s a six part limited and the story was written by David Gaider, the main writer for both games. Yes, that David Gaider that got on the Bioware forums and brilliantly responded to all of the stupid and/or ignorant arguments on the whole “Bioware neglected its primary target, straight males” set of posts complaining about the options for homosexual relationships in Dragon Age II. Anyway, the story is done by Gaider, scripted by Alexander Freed, and the art team is Chad Hardin with Michael Atiyeh on colors.

The story is set in Ferelden with Alistair already anointed as king, based on the canon ending of Awakening. There are some mentions of other characters, though the first issue of the arc is focused on Alistair, Isabela, and Varric. For a moment of praise, I think that they are great picks for the story, mixing the characters from both games together. Also, there is definitely a hint (read: I’d like more) of the witty banter from the characters that you will remember from the game. These three are also definitely the highlights for me in that aspect, and I’m quite glad I am not going to be reading six comics of Anders chatting with Aveline, or something of the sort. The games certainly lend a rich universe and one that can be mined for plenty of storytelling, so I’m glad to see the comics coming out.

That said, there isn’t really a ton to go on in the first issue. They are clearly making it accessible to readers new to the series, as a pretty significant portion of the issue is spent setting the tone of the characters, some exposition to explain past events or relationships, and establishing who various groups are. The issue is focused on these three characters and a certain something going on with The Crows, so it’s definitely familiar territory for those who played the games. Despite the fact that most of the issue is establishing these concepts, it was a pretty enjoyable read and I’m definitely interested in what is going to come in the next few issues. I’m a little murky on what exactly is going on, but I assume that is purposefully done in order to allow the story to unfold with some surprises as it goes. 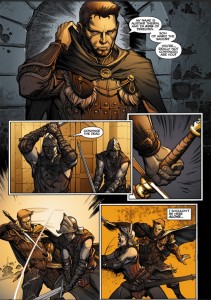 The art is very solid, using some interesting panel creation/placement throughout the issue, it’s very clean, and Atiyeh does a great job on colors as well (seriously, I’m going to be an Atiyeh expert as he’s the only colorist I ever end up reviewing comics by). The art feels dynamic as a whole and does a good job conveying the sort of mysterious feel that I’ve always had with the games. The only complaint I have about the art is that I didn’t quite place Alistair as Alistair. When he is revealed, only I had no idea it was Alistair until I read him literally saying “My name is Alistair….” Clearly Isabela and Varric were pretty easy to point to, but there’s just something a bit off with the depiction for Alistair that kept me from immediately identifying him. Regardless, that’s a pretty small deficiency to point at, and one that doesn’t really have any impact once the character is established.

Overall, it’s a short read, but enjoyable and feels very much Dragon Age in its execution. If you enjoyed the games, or at least enjoyed the story, I’d definitely suggest picking it up. For new readers, if you like fantasy tales of any sort, this will likely be right up your alley and seems to do a pretty good job at making it as accessible as possible.