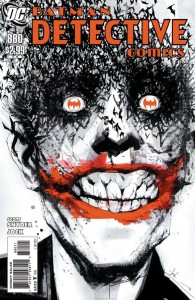 Â  Detective Comics #880 sees Barbara Gordon Sr.’s return to Gotham, when she is attacked by what appears to be the Joker. But not everything is as it seems, and it’s up to Dick to find out what’s going on before it’s too late.

Â  Right of the bat (no pun intended, I want to say that the cover to this issue is possibly the best cover of the year (so far), and will definitely be in the running come December. It’s also a perfect indication of the creepiness and tone of the book, as well as telling you who makes an appearance in side. A fantastic job by Jock and co.

Â  Now, let’s get open up the book and get into the meat of the thing. I know I’ve mentioned that Scott Snyder’s run has been creepy as hell at some points, but this is on a whole other level. It does a really good job of not letting you see Joker full on and clearly for a couple pages, and he’s even more disturbing for it. It also successfully pulls off a twist that I honestly didn’t see coming until the end, and the two page spread before the reveal is a masterpiece of suspense, in addition to that final shocker of a page that makes me angry I have to wait a month for more.

Â  Snyder’s plotting has been great on every issue, and it’s no different here. From the crazy opening, to the more quiet moments, this book keeps you invested the whole time, and makes you want to turn each page and fear for the fates of the characters. I do have one issue with the story this month though: what exactly is Barbara senior doing back in Gotham City? I suppose it’d be to see James junior, but it never really says why she’s there in the first place, and that did bother me a bit. It hardly detracts from my enjoyment or recommendation though.

New Reader Accessibility Rating: 4. You should be fine jumping into this issue, but if you haven’t been following the book you might be wondering who the hell James junior is. Also, I do find it a little hard to recommend a book that only has one more issue to follow, but if you decide to pick this up, you’ll be fine.

BOTTOM LINE: Buy it! Snyder builds atmosphere better than nearly any writer out there right now, and there’s some gorgeous art to boot. While I did just mention it’s hard to suggest jumping on at this point, it is good enough to make me recommend it anyway.