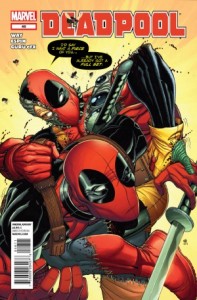 Deadpool is an interesting character, to me anyhow. He is quite unique in the comic world, which is a tall order, but it also means he works in small doses. I jumped off the Deadpool bandwagon when it seemed Marvel was intent in plugging him into every book/series they could fit him in. While that may not have changed much recently, I have decided to see how the latest Deadpool issue fares so here we are!

The issue starts off with a recap explaining to the reader that there is an evil Deadpool on the loose. How was this evil Deadpool created? Well since Deadpool has the ability to regenerate any part of his body, all of the “spare” parts are discarded. Enough of them were dumped in a dumpster together that they reformed into an evil version of Deadpool… well a more evil version since Deadpool is more of an anti-hero than true hero.

Anyhow, the issue proper begins with Deadpool running across let’s just go with evil Deadpool, and the two engage in a war of words after evil Deadpool blew up one of good Deadpool’s favorite eateries. The two then engage in a battle, but find they are too evenly match, and don’t have cool enough weapons so they decide to break and meet-up again with better weapons and in a better location.

We do a time-jump, and discover that good Deadpool figured he has outsmarted his evil counterpart (and trust me using evil, good and Deadpool repeatedly is as confusing for me as it is for you!), but his evil counterpart is actually one move ahead. Its during this scene that we discover the evil Deadpool is missing memories from the last 3 years or so, and doesn’t know that good Deadpool rigged some of his equipment to blow. They engage in another brawl, with some comical interludes with the cops thrown in between. Finally, the issue ends with the appearance of another Marvel staple!

As a whole, the issue was entertaining enough, but it really only works if you really love the character of Deadpool and the style of writing associated with him. Like I said before, he is an interesting character in many ways, but it also can be glaring trying to read him. Part of it, is that he tends to speak a lot to himself with internal monologues and refers to himself as “we” often. Then you factor in that there are two of them in the comic, and there’s a lot to weed through in the book. That said, it was still a fun read.

The art in the book served its purpose. I enjoyed the mash-up costume of evil Deadpool as its like a mini-history of the character, but felt a lot of the backgrounds lacked details. Like they were there, but pretty sparse. Other than that, nothing really bad about the art.

New Reader Accessibility: 4– Even though the comic does offer a recap page, you do need to know a bit more about the character to understand the full scope of the story, especially the cliffhanger.

Recommendation: Borrow It– Its a fun read, but really nothing too special that you need it on your book shelf.