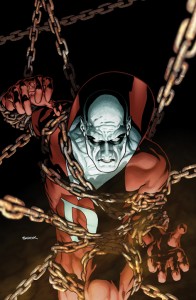 DC Universe Presents will spotlight different heroes in their own miniseries.Â  First up is Deadman which will last for five issues.

This first issue does an excellent job of setting up who Boston Brand the Deadman was as part of the living (trapeze artist and jerk of the highest order), the deal he gets when he dies (inhabit the bodies of the living in order to help them and in turn bring balance to his soul or else remain forever a ghost), and how that gig’s been goingÂ  ever since.

Brand shows us many of the people (or “bricks” as they’re referred to, since they’re paving his way to enlightenment) he’s possessed without ever saying how he’s helped them, and according to him, he hasn’t recently.Â  He’s pretty down on himself for a dead guy.

His newest brick is an ex-soldier with brain damage and missing legs.Â  Brand doesn’t have a clue as to how to help him and seeks out a psychic from the circus he used to belong to for help.Â  Great scene by the way, since she’s kind of freaked out and tries to run, but there are oh so many bodies to possess at a crowded carnival.Â  Brand returns to possess the solider and then there’s one hell of the cliffhanger.

Jenkins captures Brand’s unique voice quite well, from his frankness after having just died and conversing the the deity, Rama, to the current more introspective Deadman.Â  The art is pretty flawless from the angles Chang chooses to the expressiveness of the characters to the highly detailed backgrounds.

Survival Rating: LIVE.Â  This is the perfect series really.Â  No huge commitments since in five (or more or less since not sure if the arcs will be consistent in length) issues the story is complete and another begins.Â  And you can pick it up or skip it whether or not the character or creative team is to your liking.

Recommendation: BUY.Â  A great first issue to what looks to be a great miniseries of a great series…I hope.