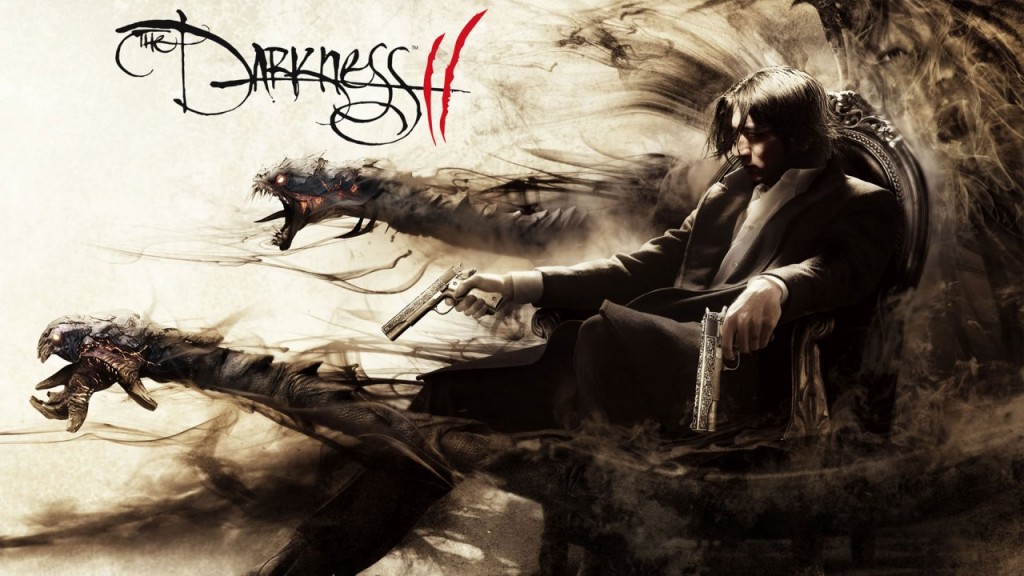 In the sequel to Starbreeze Studios’ 2007 sleeper The Darkness, mercenary developer Digital Extremes brings back protagonist Jackie Estacado, a young mafia boss who wields and ancient demonic power known as, well, The Darkness. Having decided that The Darkness is far too dangerous, Jackie has spent the interim suppressing its influence while he continues to mourn the loss of his beloved girlfriend, Jenny. 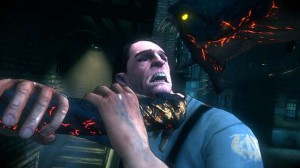 Naturally, events transpire that force Jackie to recall his powers once again as he faces a mysterious but deadly force called The Brotherhood.

At its heart, The Darkness II is a noir-evoking tale about conflict. Internally, the story centers around both Jackie’s personal turmoil after losing Jenny and his struggle to manage the empowering evil force that the Darkness. Externally, Jackie must face a formidable adversary utilizing human and arcane abilities as he channels his oscillating emotions to violent effect. At various points, the story is driven by anger, revenge, love, hope, desperation, confusion, and determination–a lot of emotional beats to hit for a game that tries to nightlight as a romping action game. A mostly stellar voice cast empowers the hit-and-miss script, injecting plenty of nuanced characters, themes, and motivations along the way. There are several moments when the tale is refreshingly sophisticated, but also several where it is held back by a humdrum over-arching plot or a torrent of gratuitous f-bombs. 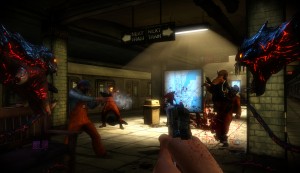 The Darkness II fully embraces its mature rating, not only in narrative, but also in presentation and gameplay. While any game centered around shooting guns from a first-person perspective tends to inherently relish violence, The Darkness II ratchets up the gore with Jackie’s demonic-serpent-like Darkness arms. These serpents smash enemies, grab objects to impale them with, are involved in environmental puzzles, and, most grotesquely, are the centerpiece of several signature execution moves that truly hammer home that “Blood and Gore” tag on the ESRB rating. Enemies are mostly standard FPS fodder as the game amounts to a shooting gallery against rudimentary AI. Digital Extremes tries to mix it up with enemies that utilize versions of Jackie’s Darkness abilities, but there is little canonical justification for these foes and they usually prove simply annoying to deal with. 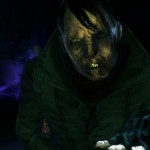 Even with those caveats, The Darkness II’s combat design excels in its thrilling variety. Jackie’s demon arms prove much more than a gimmick and genuinely provide plenty of new ways to kill bad guys in exhilarating style. The wonderfully-detailed environments add some much-needed personality to the constant flow of generic thugs, as does a very sexy cell-shaded art style that lends the game a distinct visual character while also allowing a wide variety of visual pizzazz, despite the morbid title. The basic gunplay–while very much basic–at least tries to avoid over-familiarity with a steady stream of idiosyncratic new toys throughout the story, giving Jackie plenty of firepower as he runs around with a two-handed weapon and two side-arms. The whole system is tied together by a creativity-rewarding point system reminiscent of Bulletstorm, if not as fleshed out, but Jackie’s demonic Darkness arms are undoubtedly the stars of the production. As Jackie plunges deeper into his dark story, those arms become the crutch that keeps things interesting during spells where the plot trips onward.

As the game progresses, its flaws certainly begin to stand out more. Shooting set pieces become formulaic, the plot becomes muddled and lacking, and Jackie’s constant whining about his emotional issues starts to grate. 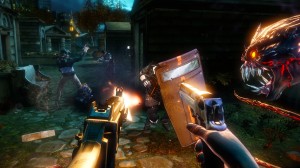 But it also keeps just enough of the good stuff coming, too, to make the experience worthwhile, whether it’s Jackie’s combat-altering demon arms, his gregarious darkling sidekick, the beautifully decrepit locales, a captivating “is it or isn’t it” subplot that can’t be meaningfully discussed without diminishing its impact, or the mysterious motivations of the antagonistic Brotherhood (even if that last one never really pans out in a satisfactory way).

Ultimately, any tale about the power of darkness will inevitably climax with such a power’s conflict with light, and while The Darkness II makes heavy allusions to that conflict throughout the story, they end up being the mere seeds of what would presumably be a high-stakes third installment, if such a game were to be made. Though the eventual narrative payoff is fully telegraphed to just about anyone who’s paying any attention, the poignant finale (and by that I mean, the entire last ‘level’) is handled quite skillfully. Just be sure to stay after the credits.

Rating: QUEEN – A decidedly mature game in both violence and narrative themes, The Darkness II is one of the more interesting single player experiences this year. An engaging combat system, a unique visual style, and a quality narrative form the basis of an enjoyable and often times thrilling interactive experience, even if each of those strengths suffer some setbacks along the way.
Version reviewed: Xbox 360