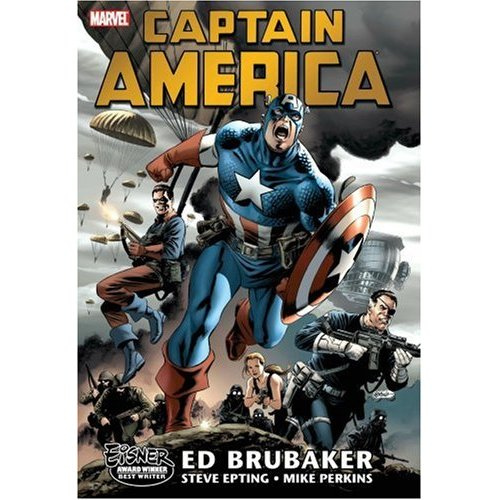 Ed Brubaker’s run on Captain America has been one of the most acclaimed (and controversial) in the star-spangled avenger’s rich history, but what makes it so special and allegedly great? Well, that’s what I’m here to tell you.

Possibly the most controversial part of the story has been Brubaker bringing back Bucky Barnes from the dead, and while it was fine to be a bit skeptical at the idea, the execution is so well done that it is nearly impossible to argue that he should have stayed dead. Over the course of the story, we come to learn how Bucky is alive (it makes a hell of a lot of sense, actually), why he’s where he is and Brubaker does a fantastic job of making us care about a character who, before now, was just another teenage side-kick. We feel Steve’s pain for a lost friend and the conflict he enters when he learns about what Bucky may have become. Hell, we even come to like the new Bucky and feel his pain too.

On top of all the Bucky stuff, there’s a lot going on in the world around Steve Rogers.Â  Brubaker revives the on again/ off again romance between Steve and Sharon Carter with strong emotions this time around, and makes it feel much more like a real world relationship. And, as usual someone behind the scenes is trying to kill Cap and while we do see who fairly early on, there is a nice little reveal later on that’ll make you look back and see some events differently.

I suppose it’s about time I mentioned the regular art properly, so I will! The main book has art primarily by Steve Epting, with flashbacks and an issue by Michael Lark. The modern day Epting stuff is, well, awesome. His action is flippin’ awesome, but he’s also able to pull off the more emotional stuff and the talky scenes to the point where they’re just as good in quality. The Michael Lark flashbacks really do give off a retro ‘40s vibe but at the same time they aren’t such a change from Epting’s stuff that the jump distracts you or anything. Lark’s modern work has got its own style as well, and definitely belongs with the quality of the other stuff. Worth noting as well is the interlude in issue seven with art by John Paul Leon and Tom Palmer that has more of a cartoony feel to it that’s unlike anything 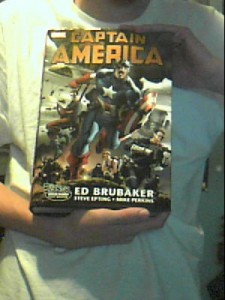 else in the book style wise.

Now, on to the second most controversial part of Brubaker’s run: The Death of Captain America. Lord knows I’m not a fan of Civil War by any stretch of the imagination, but damn, Brubaker knocks this out of the park. This would not of worked had he not done such a great job on building all these characters up for 24 issues and then taking one of them away and seeing how everyone reacts. There is some really (and really well done) emotional weight in this issue, with the best part being Bucky, whom Brubaker redefined so much and got you to know him so well, that you can’t help but feel his anger and sorrow at the loss of his best friend.

On top of the main series, we get two one-shots here: the 65th anniversary special and Winter Soldier: Winter Kills. The 65th anniversary special is a nice double-sized World War II story with art by Javier Pulido and Marcos Martin featuring Cap, Bucky and the Howling Commandos. The issue is actually a great celebration of Cap’s roots, but like a good anniversary issue, works just as well as a stand-alone tale. Winter Soldier: Winter Kills meanwhile is a side-story to the main Captain America adventure that sees Bucky reminiscing about his last Christmas (which was in 1944) while dealing with his current issues and working for Nick Fury. It tells you a lot about the state of mind that Bucky’s in and definitely helps to get you to like him. The art by Lee Weeks and Stefano Guadiano doesn’t hurt either.

In terms of additional content, we’ve got Captain America issue ten which was a ‘House of M’ tie-in that takes a look at what could have happened to Steve if he and Bucky had got a hold of that plane back in 1944 and lived throughout the rest of the twentieth century. It’s a rather depressing issue with Steve more or less sacrificing everything for his country and being left with nothing at the end of the day. On top of that, we’ve got several Spotlight interviews with Ed Brubaker that shine some light on some behind the scenes things like how he got involved with the book, and the challenge of bringing Bucky back from the dead. Thirdly, we get Brubaker’s script for issue twenty five with is commentary. There’s also a Spotlight interview with Steve Epting about his approach to the book and how he got involved, as well as some of his concept art and pencil work. Lastly, we have a retrospective on the impact that Captain America’s death had on the media.

New Reader Accessibility Rating: 5.This is one of the few series relaunches in recent years that have been very accessible to new readers while still being good for those who had been reading for years. It’s a perfect jumping on point for Cap. The only major thing that may be confusing are the Civil War issues, though it does a good job of staying separate enough that you won’t be lost.

Recommendation: Buy it! Not only is this Omnibus some of the best comics out there, it’s a great place to go if you’re interested in the Captain America movie and want to get into his comic world. And with Brubaker continuing on as writer for the fore-seeable future, you’d better get going!