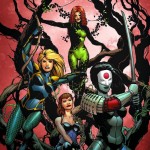 Synopsis- Dinah Lance AKA Black Canary is a wanted woman. Charlie Keen, a reporter, is on the hunt for her. However it appears that he is the one being hunted. Some Translucent knife wielding ninjas attack, so Black Canary, and Starling are here to save the day!

The Birds of Prey are great characters. Don’t think that just because they’re women, that they can’t kick some butt. Starling drives crazily to save Charlie from a Sniper’s bullet. She makes a grand entrance by driving like a maniac, and saving him, while we see Canary take out the sniper. Â The book opens with some nice action. The story does jump around in time a bit, tho. You actually get to know the characters via flashback, and they have loads of Personality.

Starling is a little crazy, and Black Canary is obviously moreÂ experienced. There’s also a flashback scene where Canary is talking to Barbra Gordon about expanding her team. For those not in the know, Barbra Gordon is the “New” Batgirl in this Universe. SheÂ suggestÂ that they recruit Katanna. Â I personally look forward to her inclusion. She’s not really in the first issue though.

The art in this book is pretty solid. Some of the profile shots in some panels look a little “off” but overall it’s nice art. The environments , weather effects and cars all look believable. The expressions and Body language are all pretty great. Â I have no idea who sent the translucent ninja guys who kind of look like one of the dudes from Daft Punk. Nor do I know Â theirÂ plan, but as a set up they did pretty well on this.

So, how easy is this book to get into for a Newbie? My answer would be “Pretty Dern Easy.”. Charlie Keen’sÂ Narration, and the FlashbacksÂ let you know who the main players are. Â The interaction between these characters lets you know what kind of people they are. All around Good Read, in my opinion.

Recommendation- Buy it. If you like action paked stories starring females, you should Dig this series.