Relationships in comics, especially those between the forces of good and evil, are a complex thing. Actually relationships are complex, but running around the city in spandex adds an extra layer of crazy to any of them… or so we seem to believe.

This issue of Birds of Prey deals with the relationship between Huntress and Catman. Two characters who aren’t really all evil or all good, but are on opposite sides of the line. Something that is handled extremely well in this issue.

While the relationship storyline forms the backbone of the comic, the action is carried by Huntress and Catman’s search to find a hostage before she dies. In their journey, they come across several elements of the underworld, and unravel a plot that left me shocked and double-shocked.

All of this wouldn’t work if not for the masterful pen of Gail Simone, who navigates the plotting and wording of this issue with such skill and precision that the final reveal doesn’t feel cheap nor unwarranted. In fact, it begs for a second reading just to catch all the subtle hints she sets up throughout the course of the issue. And really recommending a second-read is perhaps the greatest compliment someone can pay to an issue.

Even with a master at the wheel, a comic is nothing without its art, and Perez’ art shines throughout the issue and really gives weight and emotion to the character. Be warned, there are slight spoilers ahead of the visual kind! 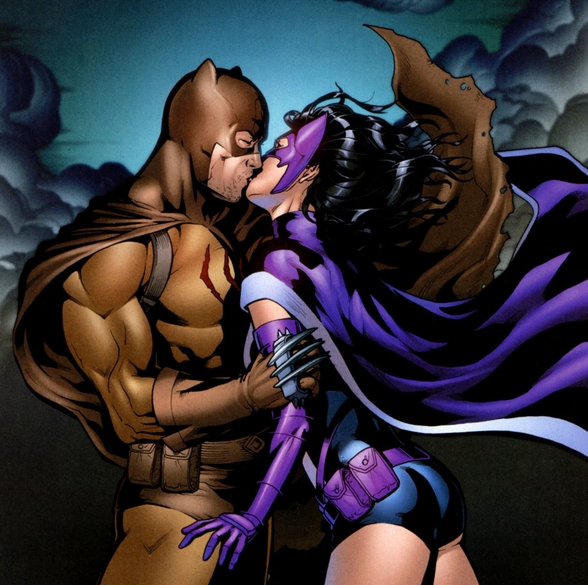 The first embrace between Catman and Huntress is random (in a way), raw and passionate. And the dynamic between the two characters, “will they, won’t they” continues throughout the issue. (Its also weird to see a comic deliver on its cover like this!)

Picking panels to display in these reviews is always difficult because you don’t want to ruin too much for the reader, but Huntress’ reaction to being kissed… well has to be seen.

Now, a review wouldn’t be a review without pointing out some flaws. And I promise you this is the ultimate nerd nitpick, but bare with me. I was just thrown off a bit by the fact that Babs has Batman pajamas. I mean I know she is grown and can make her own decisions, but it seems odd on so many levels. 1) It just seems counterproductive to the whole secret identity thing to be wearing your own brand to bed. 2) Babs has never really seen like the type to own clothing like that to me.

Like I said, it was the ultimate nerd nitpick!

I’ve been gushing about the issue for a few hundred words now so it comes as no surprise that this gets my full recommendation to go buy it, read it and then read it again. Truly a fantastic issue!.

New Reader Accessibility: 10 I believe this is the first ever 10 on this scale for the site! But this is the perfect issue to jump on with. Its a single issue that is unrelated to any on-going and future storylines. Everything you need to know about the characters and the plot is given to you in this issue, but it also serves as a great place to start reading the Birds of Prey and even Secret Six if you so desire!