Review Shooter: Batman: The Brave and The Bold 16 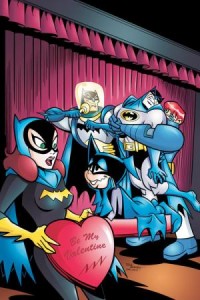 I will say I’m terrible at following comic book news. Generally, I go into a comic shop every Wednesday, pick up books that I read and generally browse for anything that catches my eye. Why do I mention all of this? Well, I picked up the latest issue of Batman: The Brave and The Bold due to the cover image not knowing it was the final issue of the series. After recently watching the show draw to a close, it was a bittersweet reunion as it ended all too soon. With that said, does this final issue shine?

Bat-Mite is a central character in this issue much like in the final episode of the animated series. I’m not quite sure if this is done by design or purely a coincidence, but it is an interesting connection nonetheless. Similar to most of his experiences, Bat-Mite makes Batman’s life more difficult than it needs to be all under the guise of assisting him. In this case, Batman has put up various prototypes of the Bat-suit on display at a museum and they are quickly stolen. Batman being Batman though, has fail-safes put into all of his costumes. Bat-Mite finds this is cheating and sets the villains free.

Fight ensues, Batman wins, but not before Bat-Mite lays eyes on Batgirl. The rest of the issue is spent with him attempting to court her. NowÂ hijanksÂ occurs when an interdimensional being with magical powers tries to court someone using techniques he learned from TV shows and comic books. The laughs are decent, but I do feel the concept wears thin before the story is done. Though, I do enjoy the final twist as it wasn’t what I was expecting exactly.

This being the final issue of Batman: The Brave and the Bold, it was fun to see throwbacks to some of Batman’s lesser villains. I mean you’ll always have your Two-Faces, Jokers, Riddlers and Penguins in the main DC Universe, but where else would people like the Music Meister, The Fiddler and Mister Polka Dot seem at home? While most of these villains don’t last more than 2 pages or so, they are used to great effect and it is nice to see them one last time.

The art of the comic mimics the television series rather well. Its a nice, clean but stylized look that works slightly better in animation, but still comes off nicely in the book. I do want to give a special nod to the page coloring during the Mister Polka Dot portion of the book. It was a nice look even if short-lived.

New Reader Accessibility- 5 I mean it doesn’t really matter since the final issue of the series, but it is a pick up and read book.

Recommendation: Read It– This is a tough one. I mean it isn’t the most solid comic books I’ve ever read, its not even the best issue of The Brave and The Bold that I’ve read, but I do think it is a nice piece to have in your collection especially if you were a fan of the animated series.

Its always hard to say goodbye, but even worse when you have to say it twice. So once more for Batman: The Brave and the Bold. Same Bat-time, Same Bat-Channel.