I’ve always been an advocate of tying in comic books with more accepted mediums (I’m sure some will love that line), but the fact of the matter is some of the biggest comic book icons are big because of their stints OUTSIDE of comic books. One recent example, would have to be Batman: Arkham Asylum, a fantastic game released on the PS3/Xbox 360 in the fall of 2009. The game gained critical and financial success so it was an easy decision for Warner to green light a sequel, which is due in the later half of this year.

First and probably most importantly, you have to be at leastÂ familiarÂ with the events of the first game as a lot of elements play off of that. The comic even starts with a brief re-enactment of the final boss battle with the Titan Joker. You soon find out that the Joker may have bitten off more than he could chew in the game, and may be dying. Its odd to feel sympathetic for the Joker, but Dini is no stranger to the character nor Harley Quinn, and at least to me, I felt bad for both of them.

Joker isn’t the only one who’s life has changed in the aftermath of the Arkham riots. Former warden of Arkham Asylum, Quincy Sharp, has quickly ascended to the new mayor of Gotham and with a mysterious therapist (if you know Gotham, you know who it is!) pulling his strings set into motion events that leads to the eventual creation of Arkham City, which is in place by the end of the story.

There’s a ton of other stuff going on in the story including a set of Titan teens (not to be confused with the Teen Titans), Two-Face and well of course Batman.

All in all, this is a pretty solid and action-packed comic, which holds back no bones. You get a ton of references to the original games, and nods to events/characters we have seen in the trailer for the new game. You even get a few cameo appearances from famous Gothamites, which I won’t ruin.

The art is fantastic, which is really surprising because as much as I love Arkham City, I never really cared for the character designs. They were kind of bulky looking. Even though, the comic takes its inspiration from the games, it is cleaned up in such a way that it really pops off the pages. This is probably one of my favorite Batman designs in some times, its just that good to me. I recommend checking it out just to see some of these wonderful pages. 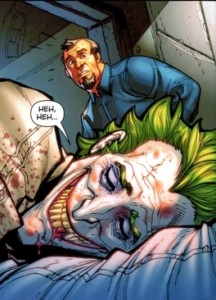 The Clown Prince at his saddest? It really is odd how Dini allows you to feel some sort of sympathy for one of the most helpless of comic book characters. 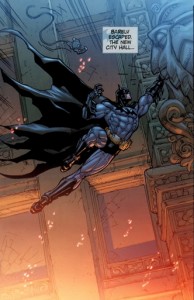 This panel is here because its honestly the best shot of Batman in the comics that isn’t from the first page and isn’t much of a spoiler. I really do dig the video game’s design in this book.

Whether you are a fan of the original game or someone who wants a way into Batman comics, this issue rocks. It is full of action, some emotional scenes (yes even if they include The Joker and Harley Quinn), and is just a blast to look at.

Now this is an interesting one as you can literally read this without ever reading a Batman comic before and love it, but to really appreciate it you need to have played the original Batman Arkham Asylum game, which I also recommend because its a fantastic game.