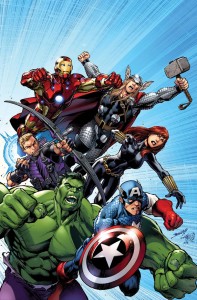 It’s becoming a common trend now that when Marvel Studios have a new movie out, a new number 1 isn’t far behind. This started back in 2008, with the release of the Iron Man movie and the renumbering of Invincible Iron Man back to number 1. It also happened again last year when both Thor and Captain America had movies out, each comic book title getting a new number one. This summer sees the release of perhaps the biggest comic book movie to date: The Avengers. You may have even heard of it. So it’s only smart business that Marvel would want a new number one on the stands to go hand in hand with the movie.

Avengers Assemble is a new, in-continuity title from Marvel with the creative team that brought you Ultimate Spider-man: Brian Michael Bendis and Mark Bagley. What makes this title stand out as well is the fact that the line-up is the same Avengers line-up that will be featured in the movie. Or so the cover would have you believe, since they’re never actually all on panel together at the same time. But presumably it will happen in a future issue.

The current Avengers title will also be tying heavily into the summer event, Avengers vs X-men, so for people wanting to avoid that but still want an Avengers comic to read, this is for them.

What happens in the issue is that we’re introduced to the new Zodiac, who will be the villains for the first arc, we see the new Avengers TowerÂ  (the old one was destroyed during last summers Fear Itself) and we find out that the Zodiac are after some artifacts, though it’s not yet clear what they’re actually after. For a number one, there isn’t much to pull you in, but we do get some fun character moments between Hawkeye and Black Widow, and a few action pages involving the Hulk. 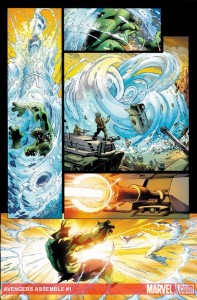 I know Marvel is hoping that this title will appeal to fans of the movie who don’t read comics, which I’m absolutely fine with. Comics need more readers. But continuity wise, it doesn’t make much sense. Because Marvel wanted the first issue to hit a month before the movie, it doesn’t line up that well with other books. Thor is standing around, and no one seems to question the fact that he ‘died’ during Fear Itself. That’s being addressed over in The Mighty Thor ongoing, but even that book isn’t quite up to his return yet.

There’s also the fact that this is supposed to be the movie team, yet there’s a page with all the other current Avengers (Red Hulk, Spider-Woman, Wolverine etc…) standing around the table. Obviously, this makes sense continuity wise, but new readers might wonder what the hell is going on.

Now onto what’s great about the book: the art. It’s fantastic. Bagley’s style really helps it look and feel like a great superhero comic. The action pages with the Hulk are so well laid out and done, that you don’t want or need word balloons covering it up. Thankfully, there isn’t many.

What’s alsoÂ  good about the book is the new Zodiac because of the audience this book is aiming for, it’s better that Marvel use a relatively new villain then, say, Kang for the billionth time. There are several members of Zodiac, and we only really see two in action, but I look forward to seeing the others in future issues. 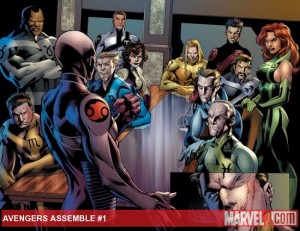 So while I don’t think it’s a great first issue for new or current readers, it’s a promising start. Bendis has been writing The Avengers long enough now to know what he’s doing, and when he’s teamed with Bagley he produces some great comics.

New Reader Accessibility- 3. It could be a cleaner entry point. But since it’s in-continuity, and therefore has almost 50 years of back story, it does a good enough job.

Recommendation: Read It. The ending may annoy you, or lack of an ending, really. But the artwork is great. I especially recommend it to fans of Ultimate Spider-man and Brilliant.