Review: Scram Kitty and His Buddy On Rails

You ever have a friend who takes things just a little too literal? The fine folks at Dakko Dakko, either take things too literal or have a fantastic sense of humor. Scram Kitty and His Buddy on Rails is the first actual “rail” shooter I can remember playing, and it makes for an interesting game once you wrap your head around it.

I couldn’t really tell you the story of Scram Kitty, the game really makes no pretense that it has one, and the one presented in the e-manual is thin at best. From what I can gather, a bunch of cats were stolen and placed on a space station, it’s your job to retrieve them, and that’s the extent of it. One neat thing with the “story” though is how some updates are told with a “Kitty Breaking News” type banner. It’s usually a reminder that you haven’t collected all the gold coins or just some playful one-liner from the game. It’s a neat addition, that you can and most likely will miss out on. 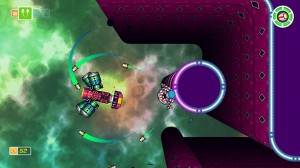 The real star of the game though is the gameplay. It’s a mash-up of platformer and shooter with the twist of being entirely on-rails. This, as noted before, takes a bit to get use to. Not only is the game on rails, but you need to come to gripes with the idea of gravity at play in the game. You can usually attach to multiple surfaces, above, below to your side and the likes, but need to understand where and when you will attach to another surface. The gravity features comes into play more when you need to hot shoot your wheeled device around a platform to a distant one or when trying to evade enemies.

The platforming bites aren’t as crucial as they would be in a Super Mario or Rayman game, but do offer up some variety to the game. Whether it is short platform-hopping or trying to navigate the parts of the rail that your vehicle can’t naturally ride over, it breaks up the frantic pacing with some tight jumps.

Traversing the landscape is only one part of the game though, the other would be the combat and this to me is where the learning curve really happens. Since you are on-rails, and this game doesn’t offer twin-stick controls, you will need to properly angle yourself when firing at foes. This works well when on a straight path and they are in front of you, but getting angled shots can be quite the experiment to be sure. 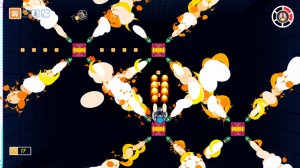 Nice looking environments to jump and shoot through are cool, but what is your objective? It’s simply to rescue the kitties that are about the stages. Most stages will have 4 cats in them with their own personality. The first and easiest cat to capture is the one who is kind enough to hang out around the exit of the level. A good day’s reward. The second easiest cat is the “Lucky Cat” who only appears after collecting all 100 coins in a level, don’t ask me how it knows. Then there is the “Black Cat” I believe who only shows up after defeating the big boss of the stage. Which is a super cat that is generally hidden in one area of the stage and doesn’t appear until after you have defeated similar cats. Finally, there’s the “Scaredy Cat” which will be the one to most test your platforming abilities. As it’s the cat that runs away from you and need to chase down before finally claiming it. 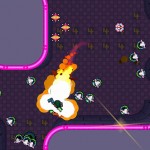 You don’t need to collect every cat in a level to progress nor do you need to capture them all at once, and I found it works better to not go after multiple ones at the same time. Due to the difficulty of the game and the challenge that any 2 of those cats can offer, I found myself working through each stage with a specific objective in mind so that I could better manage the resources available. There’s no worse feeling than freeing 2-3 cats and then dying before you can make it to the exit.

Finally, the graphics and music in this game are top-notch. The graphics have a nice clean, sprite look and can become overwhelming with certain powers and enemies. It makes it all the more hectic. Music works, but I’ll be honest I probably wouldn’t recognize any of it outside of the game.

Review 6 (out of 7): Scram Kitty is a fun, but tough game. Once you wrap your head around the game’s mean hook, I believe you will be addicted. And for $10 bucks you really can’t go wrong trying it out.