The Paranormal Activity series had initially set itself apart from other horror movies by creating a realistic ‘home-movie’ feel such as that seen in “The Blair Witch Project”, and relying on clever usage of sound and atmosphere to generate tension instead of relying on fancy computer effects or blatant carnage. Thankfully, Paranormal Activity 3 sticks to that formula, and is perhaps the best in the trilogy (though no doubt there will be a fourth, as the ending is left open for the story to continue). 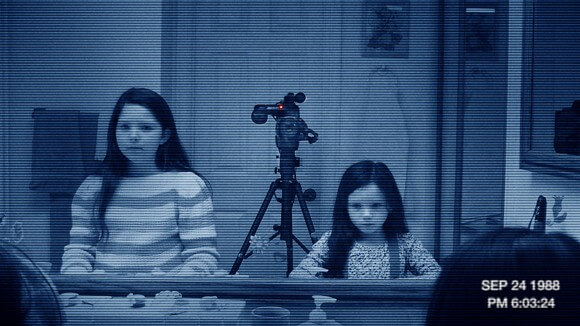 Paranormal Activity 3 starts with a short scene with the two sisters Katie (from the original film) and Kristi (who appeared in the second film), before going back in time to the 80s, when they are just kids. Â This is a prequel, and part of the appeal of these films is that there is an actual, cohesive story across them that is not too over-the-top or ridiculous, though it’s not without it’s plot holes.

The story revolves around Kristi and her imaginary friend “Toby” and this allows for Â some very creepy scenes with Kristi interacting with Toby. Sprague Grayden as Kristi does a good job of making you believe there is someone, or something, there that we can’t see.

The second film suffered from pacing issues, with hardly anything happening during the first half of the movie. Paranormal 3 solves this with a steady stream of scares coming at you, and they only get better and better.

Granted, there are some cheap scares here and the usual things that go bump in the night such as creaking doors, footsteps, and moving bedsheets, but there are also moments that gave me literal chills down my spine and had my heart racing. A game of Bloody Mary in the bathroom in particular is very well done and gives me shivers just thinking back on it. I hesitate to use the word terrifying, though I have no other way to describe the last five minutes of the film. Very chilling stuff here.

If you’re not a fan of these movies, then chances are this latest installment will not change how you feel about them. The film follows the same basic formula of the last two, though it improves upon them with better scares, better tension, and a solid storyline.

See It – The movie is successful in delivering some frightening moments. Make sure to see this one at night, preferably in a packed theater.