Review: A Nightmare on Elm Street 4: The Dream Master 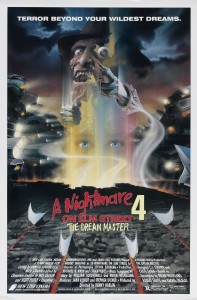 1988’s A Nightmare on Elm Street 4: The Dream Master begins shortly after the events of Dream Warriors, and focuses on the surviving teens from the Weston Hills psychiatric hospital, who have since fully recovered from their encounters with Freddy Krueger. Protagonist Kristen lives the life of a normal, well-adjusted teenage girl, and spends most of her time with her new boyfriend Rick and his friends. Just when it seems safe to forget the traumatic past, Kristen discovers that Freddy has survived and is hell-bent on getting revenge.

The movie wastes no time dispatching of its erstwhile heroic dream warriors so that it can focus on a younger and “hipper” group of teens, led by Alice (Rick’s sister), who mysteriously inherits some of Kristen’s power to control dreams. Alice turns out the be the titular “Dream Master” – an entity mentioned in a conveniently “forgotten” line from the series’ famous nursery rhyme — who is  the heroic antithesis to Freddy Krueger. Of course it takes her the entire movie to be able to harness her powers, because what fun would it be if she took down Freddy 30 minutes in? 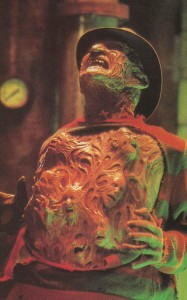 Freddy uses Alice to pull her friends into the dream world, where he is able to restrain Alice as he toys with his young victims before sending them to a gruesome demise. As was the case in Dream Warriors, the deaths are tailored to the characters’ most exploitable trait. A girl with asthma has the air literally sucked out of her lungs; a girl-crazy boy (hilariously) drowns in his own waterbed when he sees a naked woman within; and, most horrifically, a girl who is afraid of bugs is turned into a cockroach and crushed in a roach motel.

After most of her friends are killed, Alice is finally able to summon her true powers, and she and Freddy battle as equals. With the eternal souls of her friends on the line, Alice taps into her full potential as Dream Master and defeats Freddy, freeing the many captive souls that he had imprisoned over time. Alice celebrates her victory with her lone remaining friend, but catches a glimpse of Freddy in the reflection of a water fountain, suggesting that the nightmare is far from over. 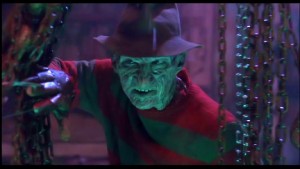 While previous movies in the series weren’t exactly terrifying, The Dream Master strives for a much more darkly comedic vibe overall, and also attempts to endear Freddy Krueger to the 80s MTV generation. Box office receipts indicate that the attempt was wildly successful (this was easily the most successful movie in the series at the time), and it also helped to launch the career of then-unknown director Renny Harlin, whose next film was Die Hard 2.

The Dream Master wisely chooses to follow the formula established by its fantastic predecessor, Dream Warriors, and the result is another highly entertaining sequel that should please most horror fans. It does stumble a bit at times, though – particularly during its first act, which focuses on the characters from Dream Warriors, who are given no love by the screenwriters. Overall, however, this is one of the most entertaining movies in the series, and a great celebration of 80s cinematic decadence.

Best Kill: Debbie’s “roach motel” death is one for the ages. It’s gross enough just in theory, but the violent transformation and gooey effects are straight out of a David Cronenberg film.

Genuine Scares:  Again, Debbie’s death is quite horrific and downright unwatchable for anyone with a fear of bugs.

Rating: 5 (out of 7) – It’s not without its problems, but The Dream Master helped make Freddy Krueger into an icon for the MTV generation.