In the past decade, Marvel has taken great strides to expand their franchises beyond the pages of comics. In some ways, they have been met with great success through endeavors such as the Marvel Cinematic Universe and even their mobile and browser-based games. On the other hand, while they continue their effort, their television projects have had a spotty track-record. But with anything comic books-related, I’m always interested in checking out what’s new.

This past weekend, I learned about Marvel Disk Wars: The Avengers via Twitter, and after reading up on the show I wanted to see what it was all about.

Â And after 2 episodes, I’m not entirely sure what this show is yet. I get the idea of wanting to introduce the characters (both the Marvel Heroes and the kids who I assume will be the stars of the show), but I feel like introducing the concept early on would help as well.

Here’s what I did learn from the first two episodes. Stark International has created DISK (Digital Identity Securement Kit), which from what I can tell is able to entrap people into these digital devices. I guess maker it harder for villains to escape from prison. We learn that a lot of high-security supervillains are currently in custody at “The Raft”, Marvel’s super prison, and Iron Man/Tony Stark believed it would be a great idea to host his announcement here with civilians. 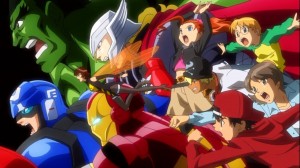 We are also introduced to 5 young kids. Akira and Hikaru, brothers, who are sons of the premiere scientist behind the DISK technology, Dr.Â Akatsuki. Akira appears that he is going to be the leader of the team. And you’ve seen it before, non-level headed, but a desire to do what is right. Â Hikaru is his older brother, a bit more reserved but seems to be the strategist of the team. During the second episode, they meet up with a second set of kids who have been checking out the Raft in order to get a closer look at Iron Man’s reveal. We have the overactive kid, the too-cool for school but eventually bonds with the team male, and the female. Really, I don’t think she has much of a role beyond being filthy rich right now.

Two episodes in, and they have only met up with Spider-Man so far, but even that was a couple of scenes before being split up again. Twas far the two plot threads haven’t crossed in any meaningful manner, and it seems like when they do crossover it will be at the tail end of the Avengers’ plot ending. 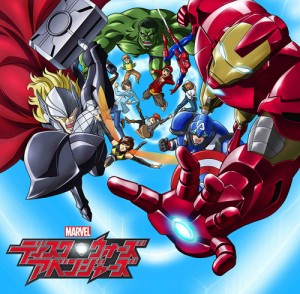 This is where I’m kind of torn on the show. I kind of want to stick with it to see what it turns into, but I also feel like that shouldn’t be your hook after two episodes. Like seriously, get to the meat of your show, no one wants this long drawn out introduction to get to the jist of it. You want to feature The Avengers characters a bit more, I get that, but not at the expense of proper story-telling. What has been presented so far isn’t that intriguing or interesting, and it doesn’t seem like the concept gets finalized in the third episode either based on the end of the second and the threads they would need to tackle there.

Didn’t mention it until now, because it wasn’t needed, but the show is also very much an anime. It means that the character designs are a bit more different than we are accustom to. Some characters are made to look younger and perhaps cuter. While some get some extremely funky costume redesigns.

Voices are a different bag altogether. I watched a subbed version of it so paid more attention to the words on the screen than their voice actors, and it all sounded fine to me. But won’t really praise or criticize it since it wasn’t a focus for myself. No character sounded off!

Â Review 4 (out of 7): There’s not a ton bad here, but that’s partially because there isn’t a ton here. It hasn’t begun yet and already feels like it is dragging its feet.Â