“The greatest trick the devil ever played was convincing the world he doesn’t exist.” 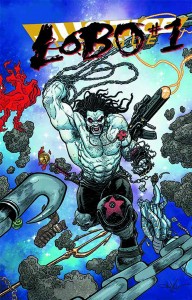 It seems fitting to take about identity with this comic, as we learn that the Lobo that has been parading around “The New 52” isn’t the real Lobo. In fact, he is an escapee of the original Lobo’s wrath. Or is he? You can never truly take a villain at his word.

But what of the original Lobo? This is our first introduction to the character, and I got to say the book does a good job of establishing him as a vile and evil creature. Job accomplished.

The story starts with an unnamed character in a bar catching a show. The main attraction takes the stage and the shadowy figure leaps along the audience before slicing his target into thirds in plain sight of everyone. This character had balls and he was deadly.

Later on, we get something out of the movies where the main character realizes he is transported mistreated people (Think The Transporter), and in these situations the character finds his heart and takes the battle to those who would do such evil. That’s in the movie, and Lobo is no hero. This was a terrific scene to set-up the fact that not only is he deadly, but he has no compassion nor will he show mercy.

We’ve established his character trait, but the thing the internet really gravitated towards when new Lobo was revealed was his design. I will say this, it is slightly different in the comic itself, and while I still prefer the larger Lobo, the new design isn’t bad. I feel he is ripped from a video game, but it works in this book.

The art as a whole is pretty solid with some good use of colors and detailed backgrounds. I also dig the look of Lobo’s weapons. And how fluid the action/his attacks are on the page.

Overall, I dug the comic but I did walk away with one major problem. Lobo’s catchphrasing. During the course of the comic, he drops “Rude” and “Sorry. Not Sorry.” multiple times. It made him sound like a tween girl on a sitcom to me. It just didn’t seem fitting to character they have established.

Review 5 (Out of 7): Your mileage may vary depending on how much the new design bothers you. But it is a great introduction to the character, establishing all the core traits. Curious to see what the future holds for him.