When I was first told about Ittle Dew, it was described to me as a top-down puzzler similar to classic Zelda games–cue block puzzles and interesting items ushering you through windy dungeons. Â As one of the biggest Zelda fans this side of the Sacred Realm, I was already really intrigued. Â After checking it out for myself this looked to be 100% true, and along with that gameplay style it appeared to ooze charm from the enemies to the dialogue, heck to even the name itself! Â It should go without saying that I was quickly interested, and here’s how my experience went.

Let’s just start with first impressions, really, because I feel like those are important to how you’re going to feelÂ about the game. Â Ittle Dew, if said phonetically, should tell you a little bit about the kind of humor we’re dealing with in this game. Â After watching the trailer, I feel like you’ll get an even better idea of the sort of game Ittle Dew is, it quite accurately portrays your experience and what you’ll be doing. Â Humor ranges from sometimes zany, to sometimes a little too punny for its own good, to sometimes just plain old straight-laced and blunt. Â These exchanges break up the experience primarily consisting of puzzle games with some very simple combat squeezed even tighter between those (More on that later though). Â It’s all wrapped up in a colorful package made entirely out of pure charm, which evidently are the components for making fresh Ittle Dew.

Immediately when starting the game you are introduced to our core cast of characters. Â You’ve got Ittle Dew, the tomboyish heroine who loves hitting things almost as much as adventure, and her assumed friend or pal of some sort, Tippsie the flying fox. Â Tippsie serves as the hint system in Ittle Dew, accessible at any time and very context-sensitive. Â Upon realizing these hints applied to essentially every encounter, from boss strategies to where to go next to how to use your newly obtained item, it became a little disappointing knowing that at any point I could press a single button and essentially have the answer told to me by the snarky fox. Â Still, the hint system is one of those where if you don’t plan on using it nobody’sÂ forcingÂ you to, but I suppose its presence was such that I never felt I would ever really be challenged beyond maybe a chin scratcher. Â Shortly after testing out the controls and diving into the optional Tutorial Cave you’ll meet the final core cast member, Itan Carver, whose name I still am determining as to whether it’s a clever pun or word use, or just plain silly. Â Itan is a pirate and tells Ittle that he’ll give her a raft to get off the island she and Tippsie crashed on if they can adventure into the nearby castle and grab an artifact for him. Â Aside from the driving force behind Ittle’s adventure, Itan is also the lone shopkeeper, who has 3 neat tools for Ittle to help her through the block-infested puzzles of the island. Â Fans of Zelda games or adventure games might have already picked up on the pattern that will soon emerge by playing. 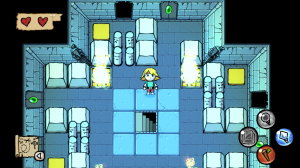 After the groundwork is laid for how this game’s going to go down and why you’re taking Ittle through puzzle after puzzle, you hop right into the action. Â To be more specific, you hopped into the action already before even meeting Itan! The game doesn’t feel a need to pander you with quest info or backstory or what buttons to press, and that’s just fine because it also has no need for these things! Think of any 2D Zelda game and shrink it down to as micro a scale you can imagine while retaining all aspects of it. Â That’s basically what Ittle Dew boils down to. Â After being told by Itan to retrieve the castle’s artifact your experience will be to enter the castle, get enough money for the next item, buy the next item only to be shot to another random location on the island, make your way out of there, rinse and repeat. Â It sounds like a mouthful, but it’s just a condensed Zelda formula. Â You get the gold, you buy your treasure. Â Whoops, apparently Itan has an ejector button in his shop because you’ve been flung to the forest area! Â Worse yet, you’ve lost all your items and have to find the one you just bought (Which is for whatever reason inside a chest in the area you were flung to) to get back to Itan! Â Oh, you’ve returned? Â Well, your lost items were in Itan’s trash can. Â Why don’t you just go back into the castle so you can get that next chunk of gold so it happens again.

As much as it sounds like I’m berating Ittle Dew for condensing the formula to the purest form, it’s actually quite funny in how it’s done. Â I honestly have to wonder if they took liberties like this to poke fun at the Zelda formula, especially when there are more clear examples of them doing so which I’ll let the game tell far better than I can hope to. Â It’s that sort of self awareness of what Ittle Dew is and what it’s trying to accomplish that shine in the execution of it. Â The obvious reason I was drawn to it was for what it delivered in gameplay and also how charming it delivered it, aesthetically. Â What it showed me was the charm wasn’t done there and it was happy to poke fun at how formulaic it is, like all games like these tend to be, while still taking pages out of Zelda’s books and making some lighthearted fun of them. 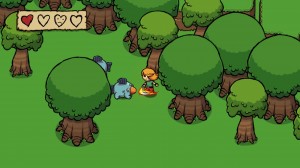 If you get over the massive amount of charm I’ve been talking about with ittle Dew and get down to how it plays though, I think you’ll get a mixed bag of enjoyability. Â Ittle Dew, despite all appearances and what I may have just said in the previous paragraph, is not as much Zelda as you want to believe it is. Â The complexity and depth is simply not there. Â That’s okay though. Â Ittle Dew never wants you to think it is. Â Puzzles are almost all contained in smallish rooms, the exceptions being those where you need to carry fire from one room to another but those are it. Â There are only three items you ever need to buy and even then one of them is an upgrade to your lone starting item of the stick. Â The castle contains plenty of rooms, not to mention the many optional paths scattered around and the three side areas you travel to, which also have their own secret grottos to explore. Â All this, for myself at least, only amounted to an experience just under two hours. Â This is not includingÂ allÂ the side areas, although a handful of them were explored. Â While I was disappointed with that short length, at least Ittle Dew didn’t try to grasp at straws and pull me back in by making me feel like there was more to it than there is. Â And hey, for what it’s worth speedrunners should have fun with this game because it’s got loads of ways to hasten your subsequent playthroughs and it’s small enough to have a go or two in an afternoon. Â While it may not be 100% deserving of that ten dollar price tag, Ittle Dew certainly delivers a small slice of Zelda gameplay for those looking for a bite. 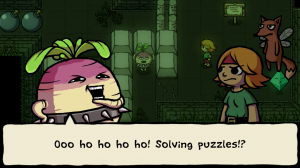 Finally, I want to touch upon some of the hiccups Ittle Dew comes with. Â The one that immediately comes to mind is how slippery the controls feel. I played the game all in a single sitting with the Wii U’s Game Pad and for the life of me could not figure out if I was better off using the control stick or D-pad. Â What Ittle Dew suffers in this regard is too much give one way or another. Â If I want to move straight up and point my control stick in that direction it is far too easy for Ittle to end up wavering right or left too much. Â This is far too apparent when pushing blocks, as often I found myself starting to push them but evidently Ittle slid too far to one side and continued walking. Â Related to walking, I did find that there were times quite often while playing when a little loading prompt would come up and cut up gameplay. Â Mind you, this was only ever once every dozen or so rooms so most certainly not every single puzzle suffered this. Â This was, however, a constant thing from the start of the game to the very end, and really made me notice when it happened as sometimes I would be well within a level and solving a puzzle only for the load to chug a bit. Â Finally, and this is probably actually my biggest and perhaps only gripe, combat on the whole felt way too unnecessary. Â For the most part, Ittle will be slaying the cute monsters with her stick or sword, excepting the few who will need one of your other items to overcome. Â While a few of the monsters relate to the puzzles and all of them include silly dialogue and a cute little collecting card as an extra to unlock, they feel largely in the way. Â Combat is almost completely Ittle’s swinging attack and there is no guard, making some enemies more frustrating than they should be, and they often cut up what would be a fun or simple puzzle by being overly in the way. Â This was especially noteworthy in all boss encounters with enemy spawns. Â Still, they never made me hate the game or think altogether less of it, although it does strike me as a feature perhaps not entirely necessary to enjoy Ittle Dew.

Review 5 (Out of 7):Â Â Ittle Dew is by no means a bad game, but also by no means exceptional. Â It does puzzles exactly as right as they should be and tries to have some fun with itself and you, the player, along the way. Â While it’s amazingly quick for the $10 price point and there are some minor annoyances, it’s still a fun experience, and I look forward to maybe seeing more of Ittle and Tippsie in the future.