This week brings a new issue #1 from Dark Horse in the form of “Hellboy and the B.P.R.D.” It also features Mike Mignola to co-write the script, so it was something I was really looking forward to. On top of that, there was Alex Maleev on art (well known for his work with Bendis, including Spider-Woman and Moon Knight, two of my favorite Marvel characters), so I was doubly excited. So, really what I’m saying is it’s a great creative team and I really wanted to love this comic… sooooooo….

Well, let’s start with art. The art wasn’t what I normally would have expected. Maleev has always been a bit, shall we say, grimy? There’s been a visual influence of harsh inks and splotchy shadows, dark details and an eery sort of feel. That still exists here, but in a different way. This comic has gone very minimalistic in comparison to a lot of the other work I’ve liked from Maleev. If you’re someone who has read my comic reviews before, you know I’m not much of a fan of the super heavy inks and shadows with a minimal detail for distance points of view. This is very much that sort of feel. That said, I actually quite like it. Here’s the difference between a typical depth-less and heavy ink and what’s offered in this comic: normally you’ll find a flat face with little coloring and just some thick lines assumed to be eyes and a mouth that really just… exist. There’s a line there. You can see that character has a mouth. This comic does a great job of taking that approach, but the mouth isn’t a mouth anymore, it’s a smirk. The eyes aren’t just blotchy dots, they are a leery stare, or a concerned squint, or a tired gaze. Being able to portray those detailed emotions with such a broad stroke is really impressive to me and something that I definitely found resounding about the comic. 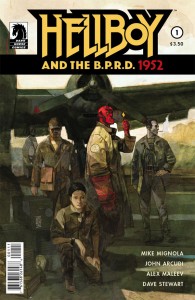 As a whole, I really enjoyed the art despite it being of a type I don’t normally find too much of an appreciation for. Although there were great pencils and inks, the colors were a bit washed-out, although they did an adequate job of conveying the less than breakneck pace of comic.

To clarify some on that, as mentioned earlier, this is a first issue for this series. In terms of story, it’s everything you would expect a first issue to be; not a whole lot. You see some Professor Bruttenholm, you see some Hellboy, you see a few other people. That’s really kind of the end of it. The entire story is nothing but an introductory piece that may (hopefully) set up what is coming next. I’d like to say I’m exaggerating, but the entire comic (MINOR SPOILERS) is literally a dream of Bruttenhom’s, six pages of a discussion with his team in a library, and fourteen pages of the team moving out, then catching a glimpse of some (textual and context only) hints of what may come. I really feel like I can’t even legitimately review the story yet, because there is none. On one hand, I suppose it’s an issue one, so expect a lot of exposition and circumstantial descriptions of the characters. That said, it doesn’t have to be that way. There are certainly more dynamic ways that we could be brought up to speed (seriously, nothing happened yet, how fast do we need to be going to catch up?), and with a more engaging method.

Anyway, I like Hellboy, I like B.P.R.D., and I’m excited to see where this goes. Hopefully the future issues are a little more engaging. If you’re a Hellboy or B.P.R.D. fan, though, I’d suggest skipping this issue unless you plan to collect the arc. Do you know who the Professor is? Do you know who Hellboy is? Okay, here’s the comic (SPOILERS AGAIN): Hellboy goes out on his first mission; it’s in Brazil at some sort of church with suspicious character about. The end.

Review 3 (Out of 7 Hellboy fists to the junk)