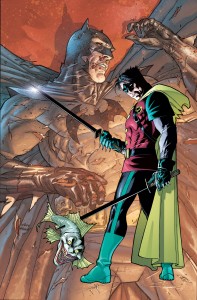 Since his death, the DC Universe has sorely missed Damian Wayne. And while this is comics and can bring anyone back from the dead, it is nice that DC hasn’t really hinted or teased that yet. But how do you capitalize on a popular new character, you killed off, without bringing him back? You tell an Elseworld tale!

That said, I wasn’t entirely sure what I was expecting when I decided to pick up Damian: Son of Batman. I knew it was an alternate future for the DC Universe (and a prequel to the Batman #666 story from years ago), but this was kind of messy.

Damian has grown up a bit and instead of being a bit whiny, hot-headed and spoiled child, he is now that as a teenager. It isn’t as endearing when you are that age especially if you’ve been on the job for some time. Damian and Batman go to check out a massive kill-pile when an explosive fish (Yes, no error) seemingly kills Batman. This sends Damian into a dark place, which ends with him going on a rather vicious killing spree. It ends with a typical, comic book cliffhanger, which wasn’t all that special.

But at the end of the issue, I was just left wondering what I had read. I know it’s an alternate timeline and has 3 more issues to go, but it takes Batman out in the most amateurish way, and then we get a comic full of Damian not evolving as a character in the many years that he was active as Robin. A random recap of his origins and history with other characters.

I get the notion, but advancing the story down the road and showing so little growth in your lead just doesn’t work. How are we supposed to take his eventual change (I mean he does eventually become Batman in this timeline) seriously if it shown that he is still that frightened kid at heart.

Unlike the story though, I did find the art good for the most part. I didn’t care for Alfred’s design, but it does seem difficult to draw age properly for some people. There are some really cool panels especially when Damian awakens from the explosion and later on when he emerges from a night out with some villains. Really lively art and focused panels.

Review: 3 (Out of 7): Not a strong start for the series and really not a great return for Damian Wayne. Let’s hope this mini-series turns out worth it.Â