The final issue in a comic arc can be a crap shoot. It needs to wrap up the story proper while still leaving enough of a tease for fans to carry on with the series. It also forces me to reflect upon the journey to get there. Some comic arc justifies the windy, twisty road to get to a satisfying conclusion while other play it straight and offer a twist at the end. 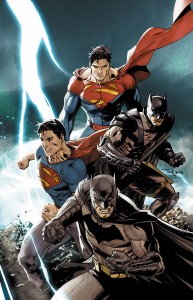 The end of Batman/Superman 4 left me a bit conflicted. For the same reason, I tend to dislike prequels in general. There’s a story finish line that they need to reach, and sometimes creators cheat to get there. It’s not a new trick nor is it one that offends, but it is a shortcut nonetheless.

We spoke about the end, but what about getting there? This issue was fairly interesting continuation of the Superman/Batman dynamic, present and future. It was fun kind of seeing the Batman/Superman of “our” world working on becoming the friends and partners we as the audience, and the Earth-2 Batman and Superman knows so well.

The characterization is a ton of fun, but I wish there was a stronger story to support it. The idea of this magical crystal in which the two teams must decide whether to save it or destroy it isn’t really high-drama. Again allows for some great exchanges between the characters, but not much else.

When we do see the crystal’s true power, it makes for some truly reflective moments for our Superman and Batman, but by the end of the issue none of that really matters to them. It’s like giving the characters moments of growth before snatching it away from them.

Finally there’s the art. I’ve been a fan of the art for the series so far. Mostly because it is so different. One issue I do have, and not really the fault of the artist is just having clone characters. It’s a bit easier to tell the two Superman apart, but the two Batman can be a bit harder to spot especially if not at the right angles where can see the difference in their emblem or armor. And while some may have issues with it, I still believe the book does a tremendous job from a storyline standpoint of justifying a change in art/artist. It continues to work here!

Review 4 (out of 7) – The first arc of Batman/Superman was fun, but kind of doomed to failure for being a prequel of sorts. While it doesn’t end with a magical bullet (I still hate you Wolverine Origins), it may still leave some fans disappointed. Â