Welcome Bat-fan and fanatics alike to the second part of Project Batman. Going to offer the same disclaimer as I did with the first part, there is no true format as to what this project is. Simply me taking the Dark Knight through his cinematic career, and sharing some thoughts on it. So sit back and relax, the world is just out of World War II and the Dark Knight faces his most mysterious foe to date! 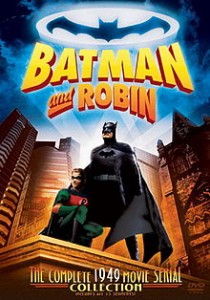 A well-done mystery is something special in a movie for me. There’s no greater feeling than playing detective (come now, Batman is my favorite comic character some of his traits rub off!) with a film. Examining every scene, every shot to see what clues were left behind for you and what was simply used as a red-herring. A good director knows how to hide these things in a film, and offer a pay-off that works for the audience.

A poor director on the other hand uses all their tools to intentionally misled the audience, and offering up a cheap and hollow “Gotcha” surprise. That more often than not leaves the audience feeling cheated .Its one things to mislead, its another thing entirely to lie.

I mention this because at the heart of the 1949 serial, Batman and Robin, is a mystery about the identity of the main villain, The Wizard. Throughout the course of this 15-part serial, we are given a handful of suspects and scenes that allow us to believe that it could be any one of these men. And if the film had revealed any one of them to be the Wizard, I wouldn’t be surprised. The problem is, the film doesn’t. Instead, it introduces an element in the 15th and final part of the serial to resolve the entire thing. And when you have invested over 3 hours (or back then nearly 4 months) of your life, it comes off as cheap and weak. It really soured me on the whole experience.

Which.. really doesn’t say much because as a whole, I find the second serial to be weaker than the first. Partially because the format is no longer new to Batman, and it does recycle a lot of the tropes from the original. The cliffhangers also appear to be even more lazily constructed and resolved. There’s one that ends with Batman being electrocuted, only for the audience to discover that a metal pole actually hit first and Batman just knocked himself out. Or another one when the villain’s goons light the water around Batman and Vicki Vale on fire, only for them to swim out and climb up like nothing was happening. 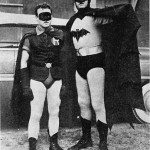 Also while this serial was made 6 years after the original, the production values seem a bit cheaper. Mostly in terms of costume designs, I felt that Batman’s costume never properly fit the actor and would hang off of him at times. Robin’s was a bit more interesting since they didn’t want to go with the pantsless look, he has on skin tone tights, which is more noticeable in other scenes. I will say both serialsÂ benefitedÂ big time from being in black and white.

Then there’s the actors, we have Robert Lowery and Johnny Duncan taking their spin as the dynamic duo, Batman and Robin, respectively. And as a whole, I didn’t care for them as much as the original duo, but they do a serviceable job. Lowery plays Bruce Wayne more as a lazy, sit about then a playboy that is his typical role. And Robin is Robin, though oddly enough it was strange to see him always dressed in a dinner jacket.

The serial also suffers from the problem I had with the original, they never really explain how or why Batman and Robin get to do what they do. There’s no hint as to how Bruce is able to afford all these toys or that he never has to work. There’s no explanation as to why the police force shares information so freely with Bruce either. That was the strangest thing in the world how they would just call and offer up the latest details in the case. 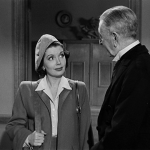 The supporting cast was a bit stronger with Lyle Talbot introducing the world to Commissioner Gordon on the big screen. And unlike Captain Arnold in the first serial, he isn’t a completely inept cop. And does some work independent of Batman and Robin. And unlike later portrayals (up until Oldman took over), he is actually a man you could believe to be a cop that would earn Batman’s trust and respect. Jane Adams would become the first Vicki Vale on-screen. I feel like these movies are a product of their time, and she isn’t always shown to be the smartest person in the serial, but she is tough and capable at times. Eric Wilton also brings life to Alfred, and while William Austin gave the character a look, Wilton seems to introduce a lot of elements that would define the character. His dry-wit, his knack for stepping in for Batman and Robin when needed and his buried warmth. He doesn’t get a lot of screen-time, but it is a nice performance.

Unlike the first serial, this one doesn’t really introduce anything of note to the Bat-world. Like mentioned above, it is the world’s first glimpses of Commissioner Gordon and Vicki Vale outside of the pages of comic. We also see the Bat-signal for the first time, which oddly enough works in daylight (Don’t ask me.) And while they aren’t proper utility belts, we do get some bat-gadgets in this film. While none of them are named, and even more so some are questionable as to how they fit, we do get them. 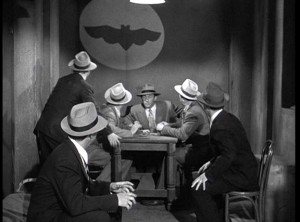 One thing I failed to mention when discussing the 1943 Batman serial, but is just as important here is that the serials show a more well-rounded Batman. Unlike the later movies, we are reminded that Batman is a skilled chemist and a master of disguise. He uses both of these traits in various parts of the serial to further the plot. While we do see elements of him as a chemist (mostly in 1989 Batman), the disguise bit pretty much is never recognized in later films.

On the flip side though, Batman and Robin aren’t the most skilled or graceful fighters. For the most part, there means of attacks are just to punch people silly. If they aren’t punching you silly, Batman tends to have a spot where he hides then throws himself at bad guys passing by. And the oddest of them all, is them just falling to the floor and bad guys throwing themselves over them. I realize that Batman and Robin have to lose fights in order to keep the serials going, but again I feel like the writing team could have been more creative.

It may sound like I’m done on the Batman and Robin serial, and while I do find them weaker than the Batman serial, they were an enjoyable ride. Just don’t let yourself get into the mystery too much since the writers didn’t really care to offer a proper conclusion to that or several other story threads.