We are now entering the era of Batman films in which most people who read this site have seen. The Adam West-led Batman series has quite a reputation among fans. On one hand, there is a lot of hatred surrounding the series for turning Batman into a joke. The series had a very tongue-in-cheek sense of humor and how many “Holy XYX, Batman” could Robin actually drop? On the other hand, some embrace the show’s inherit cheesiness, and see it as another take on the Bat-mythos.

Whatever side of the coin you fall on, there is no denying that the Adam West series drove the Batman mythos and pop cultural movement in the 60s. The show was so popular in fact that tat the end of the first season, a movie was commissioned (Yes, slight revisionist history, but we’re not going through the ENTIRE story here!). In order to transition from the small-screen to the big-screen, the crew just went with bigger=better. This movie has Batman and Robin matching wits with not 1, not 2 but 4 different villains. 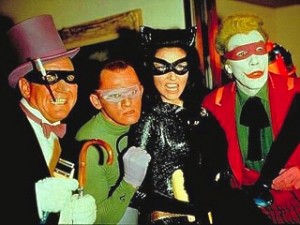 And unlike the serials, these are some grade-A villains on display with. The Joker (Cesar Romero), The Penguin (Burgess Meredith), Catwoman (Lee Meriwether) and The Riddler (Frank Gorshin) team up to not only take out the Dynamic Duo, but to rule the world with an iron-fist! Of course, the world can sleep easy since Adam West’s Batman teams up with Burt Ward’s Robin to fend off their fiendish foes. Along the way, they are aided by their always trusty butler, Alfred Pennyworth (Alan Napier ), Commissioner Gordon (Neil Hamilton) and a ton of bat-gadgets.

Oh yes, I said bat-gadgets! I made reference that in the serial there wasn’t a lot of emphasis put on all the wonderful toys Batman has access to. As if trying to make up for it, this movie goes overboard with it. Not only does it go overboard, but they make sense to name everything Bat-something. In this movie, we get the Batmobile (first time it is named in a movie), Bat-copter, Bat-cycle, and Bat-boat as means of travel. We also get the Shark Repellent Bat-Spray (one of the movie’s more memorable gadgets), a Bat-Turn Lever (because how else would you turn your car), and Bat-charges (which can be used to disarm missiles!) And that’s only the tip of the iceberg. I’m fairly certain that Batman went around the Batcave with a label maker just putting Bat in front of everything. In any other movie, I would find it kind of cheap and corny, but like I said this movie doesn’t attempt to take itself serious at all.

Aside from the influx of Bat-gadgetry into the film, we also get slightly better choreographed fight sequences. While Batman and Robin still rely on mostly punches and kicks, it has been dressed up a lot to make for a better spectacle. To add to the visual flair, the movie borrows from the TV show and adds giant comic book effects during the cutscenes. It was always a treat to watch, and time has been kind to it. 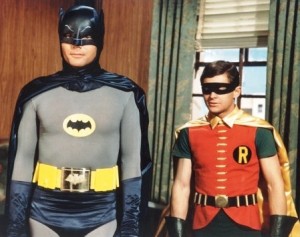 I started out this series by saying that it wouldn’t strictly be a review of the movie especially once you start to get into films I’ve seen multiple times. I’m going to exercise that option with this film. Not because it is a difficult film to review, but because it wouldn’t really offer much meat to this dish. The film knows exactly what it wants to be, and it never really shies away from that identity. The acting, the special effects and even the plot follow the tone of the product so pitch-perfectly that most faults with the film could just be chalked up to that.

Instead of attempting to review it then, I’m just going to share some of my favorite scenes/exchanges in the film because it has a ton of memorable moments.

The first, and my personal favorite scene in the entire movie is when Batman, Robin, The Commish and Chief O’Hara are running through the current supercriminals at large.

If you want to see the scene play out, check out the clip here.

Then to go back to the scene that sets this one up, and perhaps one of the most infamous scenes from the film, I present the shark attack!

Another scene from the film that gets a lot of love is when Batman is trying to get rid of a bomb (one that has the longest fuse ever!) throughout Gotham Harbor.

Some days you just can’t get rid of a bomb!

And to bring this full circle, another exchange between the four men as they discover their greatest fears have been realized.

Commissioner Gordon: Penguin, Joker, Riddler… and Catwoman, too! The sum of the angles of that rectangle is too monstrous to contemplate!
Batman: We’ve been given the plainest warning. They’re working together to take over…
Chief O’Hara: Take over *what*, Batman? Gotham City?
Batman: Any *two* of them would try that!
Commissioner Gordon: The whole country?
Batman: If it were three of them, I would say yes, but *four*? Their minimum objective must be… the *entire* world.

Those are my four favorite scenes from the film, and feel free to share any that you love in the comments section below.

Before we wrap though, I want to point out some of the elements been discussing in other parts of Project Batman. First, this film still doesn’t make mention of how or why Bruce Wayne is rich. Granted unlike the serials, this show was a tie-in to the TV series which did mention it a bit more so was probably redundant information. Second, while a trademark of the Batman character, we are 3 films in and he still doesn’t use a batarang! He does however use the bat-grappling hook for the first time though. Unlike like later versions though, it isn’t an automatic device instead forcing Batman and Robin to climb up and down structures.

That ladies and gentlemen, was 1966’s Batman The Movie. Tune in same bat-time, same bat-channel as we jump 30 years into the future!